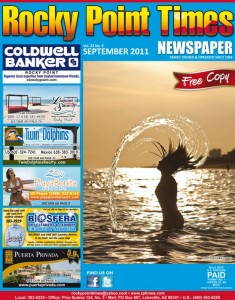 Many times, I have said that every day is a learning curve living in Mexico. Having lived in Rocky Point for twenty years I am used to being stopped in a road block, either by the local police passing out literature, checking for alcohol, seat belts, etc. Or by the Army, who are dressed in their camouflage uniforms, carrying AK-47’s and driving Hummers with machine guns on the roof. They, for the most part, are checking for drugs and every so often the Federales, driving their black highway patrol cars, set up a check point looking for stolen vehicles and all of the above.

Last weekend my nephew, Rusty was visiting and, after a day of swimming, running my dune buggy up and down Competition Hill and finishing the day off with tacos at my favorite restaurant on Calle 13, we headed back to the Ranchito. I told Rusty, who was driving, let’s take the back road through the desert, which we did. We were headed north on Ave. Constitution past the prison. It was very dark out and to make matters worse, the buggy headlights only shine about 30 ft. in front of you. So we were cruising about 30 MPH when all of the sudden – in the middle of nowhere – we were blinded by bright lights, headlights, spotlights and flashlights. Rusty was yelling, “What do I do?” when a nanosecond later I saw the outline of a Humvee and a camouflage uniform. I yelled back, “STOP! And turn off the motor,” which is exactly what Rusty did. Then an Army man, surrounded by others of his kind, all with AK-47 rifles, stepped toward us and asked us where we were going? I explained that I lived in Club Lomas Campestres and that we were on our way home.

The Army man then simply said, “Have a nice night”. From lights on to lights off it was probably no more than three minutes, but it too my nephew about 10 minutes to stop shaking. He then said to me, “I don’t know what I would have done if I were by myself. All those guns. No lights. Out in the middle of nowhere. I was scared! I thought they might be bandits. If I wasn’t with you I would have probably stepped on the gas.” I said, “It’s a good thing you didn’t,” because I honestly didn’t know what they would have done if he didn’t stop. The lesson learned that night was…that if you’re not familiar with the local way of doing things, it’s best to stay on the well-travelled and/or paved streets and highways – especially at night. (Rusty also claimed that he sharted himself, but he’ll have to explain that one to you!)

A few weeks ago we got several calls from people who were upset because a lot of their supplies that they were bringing with them to Rocky Point were confiscated at the border by the Mexican Border Agents. One family said that the agents had taken all their meat, eggs, cheeses, etc. After doing some checking I found out that, just like the U.S. Customs, there is basically a laundry list of food items that are not allowed to be brought into Mexico. And, like the U.S., the Agriculture “Not Allowed List” is in a constant state of revision. As I was writing this Editorial a gentleman, who had lived here in Rocky Point for fifteen years, was stopped at the border and was told that the bag of dog food he was bringing was not allowed, but he could pass this time only.

I caught a red light that same day and I had a dozen eggs, case of beer, two steaks, two chicken thighs and a few other items in small quantity and after a thorough check I was allowed to pass through. It’s my opinion that, while the regulations have always been on the books, they were not rigidly enforced because Rocky Point is located within the “Free Zone”. And for many years there were many food items that were not available in Rocky Point, as we were a relatively small city. Today, our city has grown and we have three large markets: Super Ley, Santa Fe and Bodega Aurrera, which is an affiliate of Wal-Mart. Today there are very few items that one cannot find in Peñasco so I am of the mind that Mexico is trying to prevent people from bringing large quantities of various items and encouraging visitors and resident to shop locally. The Agriculture Agents seem to be very adamant on not bringing beef and seafood into the country.

They also caution against eggs, cheese, milk and chicken so, if you need to bring these items with you, make sure you only bring a small quantity and be aware that they may be taken away from you. Just be prepared if you happen to catch a red light at the border. They do have a website of banned items, but it is not updated so we are trying to get a current list and find a way to keep our readers updated. Last, but not least, never, never have a pistol, riffle, or ammunition, or even a spare spent shell case in your vehicle.

Speaking about the border – I was crossing into the U.S. last week and a van, with seven people in it, were in front of me. Normally, it only takes a few minutes for the agents to process your passport and ask a few questions. But this time I waited what seemed like an hour, but was probably 15 or so minutes. When I finally was passed up to the customs agent I asked her what the problem was with the van in front of me? She said, in an exasperated voice, that none of the passengers had passports and they had to basically tumble around looking for proof of their citizenship (driver’s licenses, voter ID’s, etc.). Our readers all know you have to have your Passport or some other form of WHTI approved document to cross back into the U.S. and, when leaving Mexico and entering the United States, you can speed up the process by having your passport or its equivalent open and ready to pass to the agent. You can also help by rolling down all of your vehicle windows, say where you are coming from, and if you have anything to declare. When you are entering Mexico and are stopped by U.S. Agents, roll the windows down and say where you are going and that you have no guns, ammunition, drugs and are not carrying over $10,000 USD. If you follow these few rules it will speed up the entire process, making lines go faster and it makes the agent’s job a little easier.

Don’t forget to mark your calendars for October 28th, 29th and 30th for our next semi-annual El Golfo Run. You can call our office at (011-52-638) 383-6325 or email at rockypointtimes@yahoo.com for reservations. We have posted some pictures from previous runs on our Facebook Page – go and take a look and remember to “Like” us while you’re there. We’ll be posting a lot more in the coming months.

Congratulations to Julio who now has four restaurants: Mare Blu in Old Port, Mare Blu and Mi Familia on Sandy Beach and the newest edition Don Julio’s on Blvd. Fremont, one block south of Sinaloa (formerly Hacienda Las Fuentes). See their full page ad in this edition of the Rocky Point Times.

On a final note, I would like to thank our graphic artist, Bety, for her four years that she has worked for this newspaper. Bety recently resigned so that she could devote more time to promote her own business as a freelance graphic artist. We are sad to see her go. Bety’s replacement is also a very talented graphic artist and we are very, very happy to have her back on staff. Not only is she a graphic artist, but also a contributing writer. Some of you may remember her as the author of “The Eats” column. Welcome back, our daughter, Lannette!