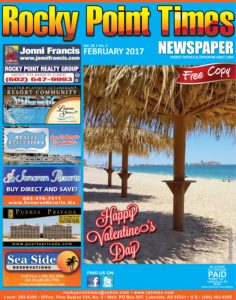 February is here, summer is right around the corner, and hopefully there is not too much rain in our immediate future. Wow, a lot of rain and gray cloudy weather these past two months. So much it seems that now I am just waiting for snow to fall. Rain and cloudy days are lovely once every 4 or 5 months for a day or two. I guess we can now say we’ve enjoyed winter, so let’s fast forward into spring already.

Just as bad as the rain is the Coastal Highway 003 from Peñasco to San Luis Rio Colorado. Well, actually to El Golfo de Santa Clara is really the only bad part. We spent the New Year in California with family and friends, and came down through Yuma and across the Coastal Highway because it saves us more than one hour in travel time. The highway is awesome to drive on…in the daytime! No potholes, wide lanes and good lane markings and reflectors for night driving. Getting through San Luis is very easy and even easier if you get pulled over for inspection, as we did coming home. (You just make less turns to get onto the main road through town is all.) And the Coastal Highway was great all the way to El Golfo de Santa Clara even considering all of the rains we’d recently had. The problem came as soon as we turned onto the Coastal Highway. I can use an OMG! Here. I would say a good 75% of the highway was horrendous as far as safety goes. I was driving at night, which I often do, because I know the roads and I never leave anywhere on time – so I am always running late. And, granted, my vision is not perfect, but I don’t (really) need glasses, which I am seriously reconsidering after this last trip.

The 003 is a hazard much of the year because of the sand drifts that build up on the highway. There are quite a few places where they build up on blind curves: Either you are trying to avoid the sand dune and move to the oncoming traffic or you have the other driver trying to do the same. So there’s that, and at night you can multiply that x1000. Then there is the center divider line that needs to be repainted because it is either barely there or faded so badly you just can’t see it in many places: I found it suspiciously missing on almost every curve. And that is not counting the last 20 miles or so (coming into Rocky Point) which is all new pavement with NO lines at all – center or otherwise! There are reflectors on maybe a sorry 10% of the Highway, which I was very thankful for. I think the worst for me was the “curve ahead” signs that are so faded you can’t read them. And not only can you NOT read them but they are placed right at the curve instead of a few feet ahead so that one can begin to slow down. And you might say, “Well, if you drive the speed limit then you should have no problem.” This is very true, but I would still venture to say it is still hazardous even at the speed limit. (And if I want to drive the speed limit I will stay on U.S. highways, so let me complain until someone fixes the problems!) I have not driven on the highway in the last couple weeks so they may have painted lines and placed reflectors on the stretches that have been rehabbed. I doubt it, but maybe. So just be warned that the reflectors are non-existent or few and far between and the center and side lines have been tarred over. If you do not have a death wish and/or are not terribly adventurous, then I recommend staying off of the Coastal Highway at night. Only at night – daytime the hazards are minimized except for a few curves with sand drifts. Needless to say, it was a road that I had to travel so I could warn you all to stay off of at night! (I know there are a lot of prepositions!)

Some more construction that will affect travelers is the construction going on in Sonoyta. And thank goodness it is finally happening! Since December the main road (Highway 2) through Sonoyta is being dig up and repaved. If you’ve driven over it in the past 3 or 4 years then you know how rutted it has gotten. I always feel sorry for the men that sell the fruit in the middle of the street at the stop sign. He really takes his life in his hands every day just to make a few bucks! It will be awesome once it is all finished. Now if we can get an alternate route through town (other than the wash) I think my complaining might be done for the year. NOT!

I am not going to tell you what day I am writing this Editorial, but let’s just say that I am guessing you will not be watching the Packers at the many Superbowl parties around town. If you are planning on being in Rocky Point for the big game then reserve your seats or get to your favorite haunt early because everything fills up so fast! Also in February we can look forward to the 3rd Annual Boo Bar Poker Run, as well as the 9th Annual Taste of Peñasco being hosted at Hotel de Peñasco at the end of Calle 13 on February 18th. That is always a lot of fun. And, we will be having a Hot Air Balloon Festival on the 24th and 25th of the month out at Laguna del Mar, and you should be able to see them from all over the city. Lots of things going on in February so be sure to check the Events in this issue and get up-to-the-minute info on our Facebook Page. Oh, and speaking of FB, apparently there is some asshat that has used our name to start their own Facebook Page. So, if you are new to Facebook, just make sure you are on the correct page. And that goes for anyone on Facebook or pretty much the entire web – take a few extra minutes to make sure you’ve got to the right people or page.

Many of you knew and went to Dr. Shelly Persad who had Puerto Peñasco Chiropractic here in town, and who has left us for greener jungles. I am happy to say that Dr. Richard has taken over the vacancy left by Dr. Persad, which makes us all who need a good chiropractor, very happy. We all say, Bienvenidos!

On a final sad note, we said farewell to a Rocky Point Legend last month. Rodger Clifton can be called one of the pioneers of this city. If you’ve been around here as long as I have, then you will remember all that Rodger and his family have done for this community. His generosity was a first and truly life changing for many. Plus he was a lot of fun too! I believe he can be counted as one of the pioneers of the modern day Peñasco, and will be remembered by many.