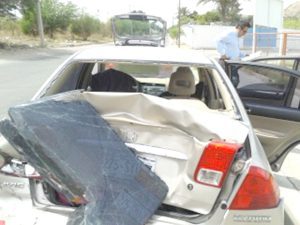 Often I travel out of town by bus, but last week I decided to take my car to Hermosillo. Since I was not yet cleared to drive after a recent surgery, a friend drove, and we had all the ducks in order for a trip south. We had a permit for my car to drive out of the free zone, my friend has a current driver license, my car is covered by a comprehensive Mexican car insurance policy, gas tank full, tires properly inflated, snacks to eat along the way…all systems go!

We had several things to do in Hermosillo, including drop off a package to a friend’s home, stock up on dog food and who knows what else at Costco, eat lunch, probably at Costco, then late afternoon medical appointments. After five or so hours of uneventful driving we arrived in Hermosillo, delivered the package, walked my dog, then headed down Highway 15 to go to Costco, which is located on the south side of the city.

As we moved with the traffic and approached a HUGE intersection, a tractor-trailer loaded with gravel hit us from the rear – we were suddenly skidding faster than we had been driving! Fortunately, the traffic light for our direction was green, and the cars in front of us had moved through the intersection, so there was no-one for us to run into. I actually had a cognizant thought that we had been hit, and I wondered how we’d stop. Imagine my surprise when the truck ran into us again! Then he partially passed us, hooked my car on his right front wheel well, and finally we both stopped.

I made a cursory inspection – my dog was covered with glass, and had flown from the back seat to the dashboard, but was fine. There was broken glass everywhere – the back windshield was gone – but we were fine, too. No blood, no broken bones. The seatbelts and headrests did their jobs, so we were a bit shaken, to put it mildly, but fine. The truck driver was fine, too, though more than a little distressed at the sight of our car, which he said he had not seen. He had left his phone in the truck, and I said I had mine.

My first call was to 066 (Mexico’s 911 on the road) emergency services. After explaining I had been in an auto accident, and assuring the operator we did not need an ambulance, only the police, she asked our location. I knew we were traveling south on Highway 15, and I knew we were in the city limits of Hermosillo, but I could not explain exactly where we were – there was no street sign! Our accident was blocking 2 lanes of the highway, but cars were able to squeeze by us on the right, and were doing so. When the light turned red, the driver of the car beside me, waiting for the green light, realized I was trying to tell the operator where we were located, and he indicated to me to pass my phone to him. I did so, he told the operator our location, handed my phone back to me, and said, “Good luck!” to me as he drove away when the light changed. Thank goodness for people willing to help! The operator told me a policeman would arrive “as soon as the traffic would allow.”

My second call was to Yolanda Silva, my insurance agent in Puerto Peñasco. I have her phone number 638-112-0366 programmed into my phone. Yolanda made sure we did not need an ambulance, and that I had already talked to the emergency services operator, then told me she would get a local adjustor in Hermosillo to help. Minutes later Yolanda called me back to say the adjustor would be at the accident scene “as soon as traffic would allow.” Did I mention that there was LOTS of traffic? After about an hour, the insurance adjustor arrived minutes before the police, and everyone was there to help, starting with again assuring that we did not need an ambulance. We made it clear that while we did not need an ambulance, we both wanted medical examinations – you never know what might go wrong when a Honda Civic is rear ended by a fully loaded tractor-trailer! The police helped us to move out of the amazingly busy intersection and onto a side street, where explanations, examination of paperwork for vehicles, insurance policies, initial assessment of damage, and citing the truck driver, were all handled. It was a hot sunny afternoon, and all this took three hours! At some point my insurance adjustor gave me a ride to a nearby store to use the facilities while he bought water for us. Finally, we emptied my car, it was loaded onto a flatbed, and we hailed a taxi. I have not seen my car since, but I am told it is in good hands…

We missed Costco – I am still out of dog food! We made all the scheduled medical appointments, after we were both x-rayed and checked out by emergency personnel. On the way home the next day, on the bus, I thought about how fortunate we were! We were not hurt, and we had an instant best friend at the accident site – the insurance adjustor. I often tell visitors that while Mexican car insurance is sold everywhere, it’s a good idea to buy it locally so that you have someone you know on your side if you have a problem! Yolanda Silva and the insurance adjustor she called to help us in Hermosillo were life savers – I believe I would still be there trying to muddle through the paperwork if they had not been available. I still don’t have a car. I would call mine a total loss, but I have learned that Mexicans often fix the unfixable, so we will see. I am hoping to have my car, or a new to me car, by the time this story is published!