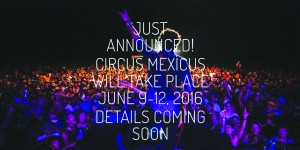 ¿Qué es Circus Mexicus? If you’ve been to any concert by RCPM you’ve undoubtedly heard it talked about. Every June, Roger Clyne & The Peacemakers pack their ponchos and sandals and head down together to Puerto Peñasco, Mexico to celebrate life through rock-n-roll with their biggest beachfront festival weekend of the year! Whether you’ve followed Roger since the days of The Refreshments, or you just recently discovered RCPM, Circus Mexicus is an experience for fans of all ages, veterans or newcomers alike.

It began in 2000 when the recently formed Peacemakers simply visited Rocky Point looking for a place to play. The Baja Cantina granted them electricity and a bar tab and the 40 or so in attendance witnessed show number 1. Fast forward 16 years, numerous venues, countless explanations with border guards, swine flus, sunburns and hangovers later, Circus Mexicus continues it’s annual fiesta each June. Peacemakers from 32 States and 7 countries called it home last year. Some call it RCPM’s “annual convention” others call it their “summer vacation kick off.” Regardless, everybody agrees it’s a weekend when clocks rotate counterclockwise, music fills the air and people from all walks of life join as one.

Here’s what you can expect below, check back often for updates.

SELECTED AS ONE OF THE 101 BUCKET LIST THINGS TO DO BEFORE YOU DIE BY PHOENIX MAGAZINE, 2013.

For those early birds needing a head start on their attitude adjustment, Thursday can be a relaxing day to discover Puerto Peñasco before the crowds arrive. Consider a tequila tasting including Mexican Moonshine Tequilas among others at Banditos or Capone’s. Head over to Old Port or the Malecon to watch the sun set over the Sea of Cortez. Visit Latitude 31 for a view of the harbor or Sr. Amigos for drinks on the waterfront. Wrecked at The Reef and Boo Bar are always busy showing whatever sports you’re missing from back home. See what the local fisherman brought in that day or leave the cooking to somebody else at one of the many seaside restaurants.

The music kicks off at sunset at our favorite third world cantina in Cholla Bay, JJ’s Cantina. Four bands will rock the outdoor patio stage with serene water, anchored boats and star filled skies serving as the backdrop. Cold beer, warm tacos and plenty of tequila set the tone for what’s to come the entire weekend. Admission is included with any pre-purchased Circus Mexicus ticket.

For some, the day is yours to do whatever you want. Go shopping in Old Port or the Cholla Bay Mall. Go snorkeling or para-sailing. Rent a wave runner or an ATV. Swim, lay out on the beach, or take a boat trip to Bird Island. Golf at nearby courses including 2 Jack Nicklaus Signature designs or read on your beach front patio.

Most are able to leave their cars parked at their condo and walk over to Banditos when the fun starts around 4:00 with an acoustic set inside. Doors at the Mexican Moonshine Main Stage open at 6:00, the first of three bands will plug in at 7:00 followed by RCPM, fireworks, surprise guests and who knows what else? Details can be found at the Line Up tab.

Have you ever seen RCPM from backstage? This is your opportunity buy purchasing VIP Backstage Passes while supplies last, which not only include admission to both the Friday and Saturday shows, but will get you access to the Peacemaker Lounge and stage deck views just a few feet away and level with all of the bands behind and side stage. Admission to all other shows throughout the weekend are included.

Still haven’t had enough? An after hour show on the outdoor stage at Banditos will start immediately after RCPM.

Roger Clyne’s annual Rock and Beach Soccer Tournament on the beach in front of the Princesa Resort starts at 8:00…AM that is! The Princesa is located on the center of Sandy Beach just east of the Sonoran Spa Resort. Over 150 players vie for bragging rights for a year with winners taking home a one of a kind shot glass trophy. Even more come out to support them, take a warm swim in the Sea of Cortez or master their favorite beach games of inactivity. Proceeds benefit The Peñasco Youth Sports Foundation. Allow a few minutes for a quick afternoon siesta, water and a well-earned shower.

Then prepare to rock your socks off again! Night two of Roger Clyne & The Peacemakers is back on the Mexican Moonshine Main Stage including more great bands, fireworks and different RCPM set list from Friday night.

The rock will continue to roll into the wee hours with another after hours show at Banditos immediately after RCPM’s set.

JJ’s Cantina plays host to the Mañanathon, a day long jam session geared to those who can delay the trip back to reality until Monday. Bands from the entire weekend will get together on stage all afternoon playing whatever they want and taking turns sitting in with one another. It’s a chance for fans to hang with the bands including RCPM, perhaps find your misplaced keys, get an autograph or maybe find a caravan for the way home. Plan on showing up just before 11am and get Ceasar to serve you up a pain relieving Bloody Mary. Then relax while looking over Cholla Bay where Roger has penned many of his classics over the years doing exactly the same thing.

Banditos will cap off the weekend with performances as the sun sets on another Circus Mexicus.

Flights from Scottsdale to Rocky Point!