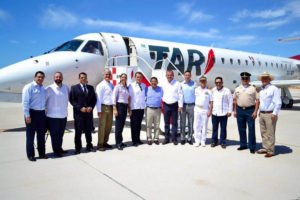 With the commercial flights of TAR Airlines launched in Puerto Peñasco on Thursday, July 21st, the city is progressing in providing connectivity to the world. These flights will connect our city with Tijuana, Cd. Juárez, and Hermosillo.

During a ceremony to welcome passengers arriving on the first TAR flight to Puerto Peñasco from Cd. Juárez, Mayor Kiko Munro highlighted the increased number of visitors to the area in 2016, principally from Phoenix and Tucson in Arizona, as well as Baja California, Chihuahua, and other cities in Sonora.

“Economic recovery is a reality; proof of this is the trust that important companies such as TAR and Grupo Vidanta have placed in us as a destination,” he noted.

He further detailed that investors are once again looking at Puerto Peñasco in search of new business opportunities, therefore the city will continue to work on improving urban infrastructure, safety, and services.

The mayor emphasized efforts of the three levels of government in achieving aerial connectivity to the area, expressing gratitude for support from all authorities and particularly that of Governor Claudia Pavlovich Arellano.

The General Coordinator of the Sonora Tourism Commission, Antonio Berúmen, affirmed with this new connectivity “Peñasco now becomes a plan”, as flights put the destination within reach of tourists not just from the region, but from other parts of the world.

The General Director of Transportes Aéreos Regionales (TAR Airlines), Rodrigo Vázquez Colmenares, stated that putting the flights into operation is a fiesta, “but a fiesta that took months of planning and has now becomes a reality.”

“With this grain of sand, TAR hopes to contribute to Puerto Peñasco and Sonora in strengthening this as a tourist destination,” he remarked, “While the city has been on the national and international scene for a number of years, it lacked strong connectivity, which is a topic we are once again addressing in providing quality connectivity at accessible prices. We seek to be on par with growth across the State and region.”