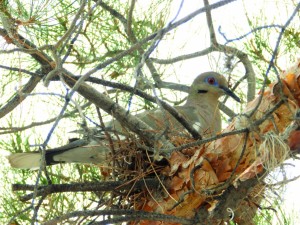 Seems to be the season for big doves to be making little doves. Everywhere I look, I’m confronted by one of nature’s favorite pastimes – procreation of the species.  In this particular case, Mourning Doves teaming up to manufacture future generations. And from what I can determine, they seem to be pretty good at it.

So, it really didn’t come as any great surprise when one afternoon I noticed a small gray dove sitting on a shabbily constructed nest in a pine tree outside my front porch. After all, a gal has to have some place to call home and raise the kids.

In addition to her enjoying the safety and shade of the tree, my neighborhood is cat free. Nearly a perfect environment to start a family or just hang-out and make small talk with other pregnant doves.

When arriving and leaving the house, I observed her routine for several days, which consisted mainly of sitting in one position for awhile, then turning and sitting in another position.  I never saw her leave the nest, which made me wonder when did she eat or drink?

Then one day I discovered her secret – she wasn’t the only one sitting on the eggs. A near identical looking dove was also helping out with the prenatal chores.

A few more days passed and suddenly a couple of fuzzy heads could be seen bobbing above the rim of the nest. The miracle of birth had taken place about twelve feet above the wife’s carefully cultured geraniums.  I felt like a new grandpa again.

Not being very scholarly in the affairs of the Mourning Dove, I decided to conduct a little research into the matter.  Never know when I might be asked to give a lecture on the dating, mating and household habits of the common Zenaida macroura. 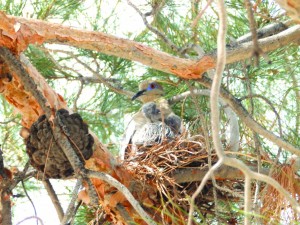 The Mourning Dove, sometimes called the Turtle Dove, is grayish-brown in color, medium-sized, weighing 4-6 ounces and is one of the most abundant birds in North America.  Its name originated from the distinctive call uttered by males to attract a love interest.  Similar in size and appearance, the adult male displays a bluish-gray crown while the female has a more brown coloring. Also a popular game bird, millions are hunted yearly throughout the United States and Mexico.

In colder climes, they migrate along established flyways, with spring migrations headed north from March to May while the fall flights south usually take place from September to November. Mourning Doves in the warmer areas of the country do not usually migrate, as food and unfrozen water remains available through the winter months.

When dating, the male will fly overhead and gradually glide down in circular motions to introduce himself to his prospective girl friend. Once on the ground, he will begin strutting around with a puffed out chest, bragging of his accomplishments and flashing an American Express Gold Card, good at any local feed store. Sort of like I did in my earlier years, only American Express denied my credit card application.

Following recording of the marriage contract, the male dove will lead the female around to prospective home building sites, but the female makes the final decision where the nest will be constructed.  From hence forth, the male will no longer be in charge of his destiny nor will his opinion be valued on anything. Again, a redundant theme throughout most living creatures, especially the bipedal primate homo sapien.

After being relegated into forced servitude, the male will begin the arduous task of gathering twigs, pine needles, blades of grass or similar material and transports the items to the new building location. The female, now totally in control of the project, places the material into selected positions. Gradually, the flimsy little nest begins to take shape and within a day or two the home is complete.

Actually Mourning Doves are not overly particular where they live. They will build nests in trees, shrubs, vines, roof tops, rain gutters, flower pots or any location they deem suitable. Sometimes when they can’t find a place to their liking, they will simply nest on the ground. Which might partially account for their exceptionally high infant death rate.

Almost 70% of the young doves never celebrate their first birthday, while their parent’s average mortality rate isn’t much better at 58%. I suppose nature has factored this circumstance into the equation because doves are prolific breeders, sometimes nurturing five or six broods a season.

As mentioned previously, I was perplexed by her lack of absence from the nest.  She always seemed to be sitting every time I checked on her. At least I thought it was her. Turns out, it wasn’t.

The male has been delegated this responsibility as well. When the wife goes shopping in the morning, the hubby will sit and assume the incubating chores until the afternoon when the mother returns from Walmart. Then, she takes over and will sit until the following morning. This routine will repeat until the eggs hatch.

Being responsible parents, they both feed the babies (squabs) a milk-like substance for the first few days, and then gradually augment the fluid with seeds for the next couple of weeks. The kids will remain at home for another week or two until they can fly or the parents finally kick them out. Remember, by this time there is probably already another batch in the oven and mama needs to clean house and make room for the stork’s next delivery.

After seeing the family life and struggles of the ordinary Mourning Dove, I’m even more thankful I’ve pasted my prime.