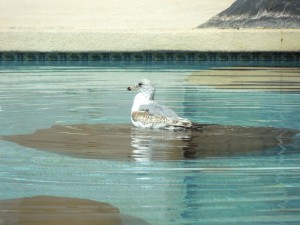 Ordinarily, Sea Gulls are found cavorting in the sea. Hence the name, Sea Gull. But every now and then Mother Nature pulls a joke, or a cantankerous gull simply feels inclined to stray off the beaten path.

While lodging at the Laos Mar Hotel in early March, I was entertained by a spirited gull who seemed to prefer the chlorinated water of the motel’s swimming pool to the salty environs of the nearby Sea of Cortez.

At first, I thought he may have mistaken the rocky formations of the pool’s exterior decor with a distant mirage of Bird Island. An innocent mistake. After all, the hotel is painted white with decorative rock-like structures adorning the pool area, which might unintentionally confuse an unsuspecting gull into becoming disoriented by the similarities.

Possible, but not probable, as I would soon discover.

Following several moments of intense observation, the feisty feathered creature decided to test the water. Making several swooping passes, as if to determine if the pool actually contained crystal clear water or if it was simply a bleached white hole in the ground, the bird flew low over the pool, dangled one foot into the cool water and abruptly ascended to the roof’s edge.

Continuing to appraise the situation, apparently not certain if the water was safe to enter, he again repeated the slow glide, foot dragging across the water’s surface, then pulled-up and returned to his rooftop perch.

Apparently convinced the water posed no danger, he skillfully coasted down to poolside, walked a few steps to the water’s edge and hopped in.

Standing atop a submerged rock, it didn’t take long until he was frolicking like a pro. Dunking his head, flapping wings and shaking tail feathers, it soon became obvious the gull was enjoying his newly discovered personal aquatic park.

And why not? Who needs an old salty sea or beach crowded with other birds, dogs, people and low flying ultra-lights, when a guy can cool-off with a refreshing swim in the privacy of the neighbor’s nice clean pool?

Now, “What time is Happy Hour? By the way, tell the wife I’ll be working a little late tonight.”