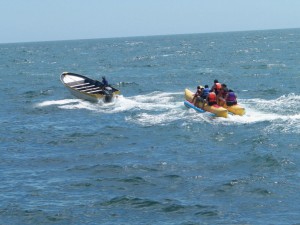 They are everywhere, and not only in Mexico.

The abundance of a small watercraft known as a “panga,” has become the developing world’s go-to work-boat. It is in everyday use from Asia, to the Horn of

Africa, to the Middle East, to the Caribbean, to Central America and, of course, Mexico.

In Rocky Point, pangas can been seen primarily involved in fishing activities but also used as two vehicles for various recreational purposes. The unmistakable image of their large bow protruding above the water as they quickly pull an inflated “banana boat” laden with half a dozen thrill seeking tourists, is a common sight along Sandy Beach.

Conversely, pangas have also been used for sinister purposes – they are the vehicles of choice of Somali pirates when chasing and apprehending merchant vessels off the coast of northeast Africa.

Contrary to popular opinion, the origins of the panga did not evolved from antiquity. The little vessel’s beginnings were actually the imagination of the Yamaha Corporation, working with a World Bank project in about 1970 to develop a small ocean fishing craft capable of being propelled by a medium sized outboard motor. The name is believed to be in reference to the panga fish, a common ocean-dweller native to the southeast Atlantic Ocean and southwest Indian Ocean. The fish is also found under different names in Indonesia and Europe.

The ordinary panga varies in length from 20 to 28 feet and about 6 feet wide. Its distinctive high bow aids in retrieving heavy fishing nets while minimizing over spray. Narrowness of the craft reduces water resistance which helps to increase acceleration generated from its 45 – 200 hp motors. They are capable of speeds in excess of 40 mph. certainly swift enough to pull an inflatable pontoon toy or chase down a bulky container ship.

Sturdy in construction, pangas are usually crafted from heavy fiberglass, reinforced with numerous bulkheads and flotation compartments. Presently, several varieties are available from a multitude of manufactures, each particular to its working environment, but all sharing a common theme: a durable water craft capable of rendering many years of use while often suffering many years of abuse.

Whether at work or play, the venerable panga continues to fill its role as one of the most economical and dependable small salt water crafts available in the last 50 years.