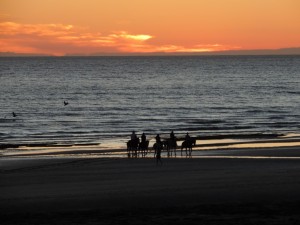 Horses on the beach are fairly common in Rocky Point – but horses, pelicans and extraordinary sunsets make an interesting combination not seen in most places.

As usual, practically every one of my visits to Puerto Peñasco produces some kind of unique experience. Whether its discovering recent changes to an ever changing city, sampling the delicacies of a previously undiscovered taco stand, or marveling at nature’s diverse variety of scenic attractions, RP is a unique community bordering the harsh arid expanses of the Sonoran Desert and the tranquilizing serenity of the Sea of Cortez.

Caught between two extremes – sand on one side; water on the other – and amidst these Earthly elements an infantile fishing village is continuing to mature into a pubescent teenager; not a kid anymore but not quite an adult either.

Within this developing process growth pangs and spurts are bound to occur. We see them everywhere; bold new construction projects are continually evolving from the minds of imaginative entrepreneurs while at the same time half-completed abandoned buildings wither or serve as extemporaneous canvases for aspiring graffiti artists.

Perhaps the most audacious scheme of all is presently unfolding on the northern end of condo row. The Great Rocky Point Cruise Line Pier is gradually being assembled stone-by-stone and block-by-block. After a jerky series of starts and stops, it remains to be seen if this grandiose plan will actually see fruition or eventually revert to a convenient fishing hangout for local onshore anglers.

In spite of all these creative visualizations, the real allure of Rocky Point resides in its people and customs. Glitzy tourist destinations reflect a contemporary appeal to those temporarily fleeing comparable facilities at home. Except, of course, without a Sea of Cortez or roadside vendors – two native staples incapable of being expunged or imitated by modern culture.

While Rocky Point awkwardly vaults into the 21st century, it still remains tethered to its ancient historical past. Not all the upscale resorts, electric windmills or seaside developments can elude the inescapable conclusion that the people and habits of this region evolved from hundreds of years of antiquated traditions – inheritances sometimes difficult to understand or appreciated by those not accustomed to their significance.

As a suggestion, when visiting Puerto Peñasco, allow a little extra time to take the side roads. Like myself, you may come to realize the charisma and authenticity of Mexico is often discovered a short distance from the beaten path.

Life on The Edge