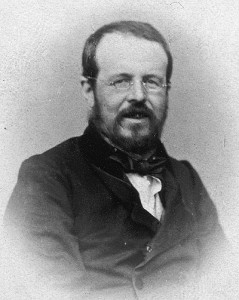 Boulevard Fremont, the street which runs east/west in front of the Red Cross and Black Dog, and has heads to Las Conchas and Caborca, was named after Puerto Peñasco’s sister city…Fremont, California. But, what about all the streets with people’s names? This is a monthly article, to explain Mexico’s history behind some of the street names, here in Rocky Point.

Biography
Prieto was born in Mexico City, the son of José María Prieto Gamboa and Josefa Pradillo y Estañol. His childhood was spent near Molino del Rey (King’s Mill), next to the historic Chapultepec Castle. His father administered the mill and the associated bakery. When Prieto was 13, his father died and his mother had a nervous breakdown. Andrés Quintana Roo took him under his protection, and he was thus able to continue his studies. After working in a clothing store and in the customs, he entered the Colegio de San Juan de Letrán.
Together with Manuel Toussaint Ferrer and the brothers José María y Juan Lacunza, he founded the Academia de Letrán in June 1836, with the aim of “the Mexicanization of literature”. Quintana Roo was named “perpetual director” of the Academy.
Prieto began his career as a journalist and theater critic with El Siglo XX, publishing the column Los San Lunes de Fidel. He worked for El Monitor Republicano, and together with Ignacio Ramírez he founded the satirical periodical Don Simplicio. A supporter of the Liberal Party from a young age, he advocated its positions in the press and in his other writings.

Political career
Prieto became personal secretary of Valentín Gómez Farías and Anastasio Bustamante, in succession. Under Bustamante, he was editor of El Diario Oficial. He was minister of finance (hacienda), under Presidents Mariano Arista, Juan Álvarez and Benito Juárez. He was a congressional deputy 15 times and a representative of Puebla in the constituent congress of 1856-57. Together with other Liberals, he supported the Plan de Ayutla, proclaimed March 1, 1854 and aimed at overthrowing dictator Antonio López de Santa Anna. For this he suffered temporary exile in Cadereyta, Guanajuato. As minister of finance under President Juárez, he accompanied the president into exile after the coup by Félix Zuloaga.
During the subsequent War of the Reform, he saved the life of President Juárez in Guadalajara by stepping between the president and the guns of the rebelling guardsmen (March 14, 1858). The guardsmen backed down and did not shoot. Prieto composed the satirical song of the Liberal army, “Los cangrejos” (The Crabs). It was to the tune of “Los cangrejos” that the Liberals under General Jesús González Ortega reentered Mexico City in January 1861, ending the War of the Reform.
After the return of the Republican government to Mexico City, Prieto, again minister of finance, published the decree of February 5, 1861, declaring that ecclesiastical property was and had always been property of the nation and that, as a consequence, contracts and other dealings celebrated by the clergy without the consent of the constitutional government were null and void. He later served as minister of foreign relations in the government of José María Iglesias.
In 1890 the periodical La República held a poll to choose the most popular poet in Mexico. Prieto won easily. He was named, by Ignacio Manuel Altamirano, the “Mexican poet par excellence, the poet of the Fatherland”. He died in Tacubaya in 1897 at age 79, in the presence of his second wife, Emilia Golard, his children and his grandchildren.

Works
A prolific author in many genres, with a festive and ironic style, Prieto’s political passion is never far beneath the surface. He is remembered especially for the following works.

How Much Do Dentists Charge in Mexico?