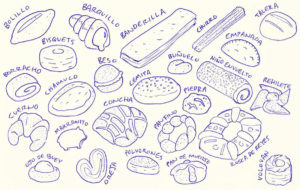 Tortillas are undoubtedly a staple of Mexican cuisine, but anyone who’s visited our neighbors to the south know that griddled masa doesn’t replace bread. In fact, the two share table space.

When sixteenth century Spanish conquistadors brought wheat to the New World during their conquest of the Aztec empire, it was to create the sacramental bread necessary to Holy Communion. According to Iberia and the Americas: Culture, Politics and History, both Iberians and indigenous people found the taste of the grains initially disagreeable until bakers began improving techniques and enhancing breads with native ingredients like maiz (corn), piloncillo (unrefined brown sugar), and chocolate. During the nineteenth century, French nationals began immigrating to Mexico, bringing with them more European baking techniques and recipes. The union of all these cultures resulted in baked goods that have become a huge part of Mexican tradition-and everyday life.

By the nineteenth century, hundreds of pastelerías (pastry shops) and panaderías (bakeries) had opened across Mexico. Today, street vendors can still be seen selling bread from baskets and off bikes, and panaderías buzz with regulars purchasing savory rolls and pan dulce (sweet yeasted breads) which come in countless shapes, sizes and flavors. Historically, these breads are dipped into coffee or drinking chocolate and enjoyed for breakfast or as a late afternoon meal called merienda, which is sometimes enjoyed in lieu of a larger dinner.

“Bread is a very important piece of every meal,” says Iliana de la Vega, the chef and owner of El Naranjo in Austin, where dinner begins with a delicate ciabatta roll served with smoky salsa. “We eat just as much bread as we do tortillas, which is something people don’t realize.”

De la Vega grew up in Mexico City with two brothers, which meant she had to stake claim on her favorite breads: lighty sweet, shell-shaped conchas and little pound cakes called garibaldis, which were slathered with apricot jam and coated in nonpareils (she has yet to find the latter in the States).

“You fight for the pan dulce you like most,” remembers de la Vega with a smile. “You lick it and say ‘it’s mine!’ so nobody touches!”

De la Vega learned to bake from her mom, but labor-intensive pan dulce was still something they purchased at the bakery, where a wide variety of options was available each day. These baked goods played a big role in her life, and she remembers the marked decline of Mexico’s bread as bakeries began using additives, processed flour and margarine in lieu of butter.

“We used to have very good bread everywhere, but in the 1970s the government subsidized tortillas and bread when we were having problems with the economy,” recalls de la Vega. “So it became more popular to make a lesser quality bread… but now there is a new wave of bakers going back to all those old breads and making them finer, with better quality ingredients.”

Elena Reygadas is one of those bakers. The chef and owner of Rosetta and Panedaria Rosetta in Mexico City, she fell in love with bread at a young age while growing up in Mexico City, where she ate pan blanco loaves with tamales and pastries her grandmother called bizcochos. She took an active interest in learning about alternative grains like rye and millet as a teenager and went on to study at the Culinary Institute of America.

“In big bakeries, a lot of the breads taste very much the same,” says Reygadas. “This homogenization process really took off when supermarkets started selling bread. At the same time, quirky, delicious breads from small-town bakeries-breads that also happen to be nutritious-have really been in decline.”

Reygades is attempting to reclaim Mexican bread, reviving traditional recipes and recreating them using natural yeasts and high quality grains. She’s become known for a pan de pulque, created using the milky alcoholic beverage made from the fermented sap of maguey leaves. As a child, her family would stop by a wood-fired bakery outside the city of Pachuca for these loaves, which were baked in empty tuna fish cans.

“We Mexicans like eating (bread) and I don’t think that’s going to change,” says Reygadas. “But it is going to evolve, and in addition to creativity and innovation, I hope that evolution includes rediscovering recipes and improved quality.”

It is said that up to two thousand types of Mexican breads exist, many of them unique to specific villages, so it would be nearly impossible to capture them all here. But the following twenty-five baked goods are likely to be found in most

panaderías throughout Mexico and the States-though they are often known by different names depending on the region.

This long pan dulce is named after the dart-like instrument used to kill a bull in a bullfight. Flakey sheets of puff pastry are brushed with butter, stacked and cut into long pieces, which are then sprinkled with sugar.

Though the name translates to “wafers,” this type of pan dulce is actually made of puff pastry formed into a cone. The pastry dough is cut into strands, which are wrapped around a cone form. They are brushed with butter and baked, then filled with pastry cream and sprinkled with powdered or granulated sugar.

Sometimes called yo-yos, these yeasted cookies get their name (meaning “kisses”) because the two pastry domes kiss each other through a layer of strawberry or pineapple jam. They may also be dusted with powdered sugar and sprinkled with coconut flakes.

This variation on the biscuits of the American South was invented by Chinese immigrants, who added egg and sugar, resulting in a sweet and savory bun with a touch of chew to it. The shape is made by using a donut cutter but leaving the center intact. These are popular for breakfast and still served at Chinese cafés throughout Mexico.

Also known as pan francés, this roll is a variation on a French baguette and most likely a result of French influence in the late 1800s. Bolillos are crusty on the outside and soft on the inside, and typically used to make tortas and molletes. There is a drier variation of this roll in Jalisco called a birote which is used for making tortas ahogadas, the spicy “drowned” sandwiches from Guadalajara.

Though buñuelos are found in Mexico all through the year, they are most popular during the holidays, when they are thought to bring good luck. After the yeasted dough is kneaded and rested, it is rolled into balls and flatted into small circles. Then each one is fried in hot oil and topped with cinnamon and sugar or served with piloncillo syrup, honey, jam, or cream.

While the exact origin of churros is debated, it is known that the pastry came to Mexico by way of Spain. Modern Mexican churros are made using a churro-making machine that releases star-shaped tubes of the dough into a vat of oil. The fried dough is then rolled in cinnamon and sugar or piped with fillings like cajeta or chocolate.

The shell-shaped concha, likely influenced by French brioche, is the most ubiquitous type of pan dulce. It consists of a lightly sweetened, yeasted dough, which is kneaded and allowed to rise before it is cut into individual rolls and topped with scored cookie dough, which becomes crystalline when baked. Conchas may be topped with chocolate cookie dough and occasionally (typically in Mexico City) they are split in half and filled with custard or cream.

This crescent shapes pastry, which translates to “horn,” is also called a bigote (moustache). The Mexican answer to a croissant (but not as delicate or rich), these are made from rolled puffy pastry and showered with sugar after they’re baked.

Mexican-style empanadas are made with a soft, slightly sweet shortened dough, filled with any number of sweet ingredients, like guava, strawberry, sweet potato, pumpkin, cheese or cajeta.

Also called a cochito or a puerquito, these darker pig-shaped pastries get their color from cinnamon and piloncillo, which is boiled into a molasses-like syrup. The syrup is added to the dough which is shaped like a pig and baked to a cake-like texture.

This sweet, which literally translates to “wrapped up child,” is a jellyroll made with a slightly sweet cake rolled with strawberry jam, pastry cream or cajeta. The entire roll is typically coated in jam, then sprinkled with powdered sugar and coconut.

This “eye of the ox” is made from sweet biscuit dough, which is cut into a circle and then wrapped with several layers of puff pastry.

French pastry flourished under the rule of Porfirio Diaz, who brought French bakers over to instruct Mexican panaderos. The palmier (meant to imitate the shape of a palm leaf) was one of the recipes they brought to the country, and this sugar-coated, ear-shaped puff pastry bears little difference from the original.

“Bread of the dead” is made to celebrate Día de los Muertos in October and November, and the round loaves are usually enjoyed at the gravesite of the deceased. The slightly sweet, brioche-like bread is enhanced with anise seeds and orange blossom water or zest, then sprinkled with sugar and decorated differently depending on the region. (In Mexico City, they are often decorated with a skull and crossbones, while Oaxaca puts a small face on each of their loaves, and the versions in Hidalgo are shaped like human figures and sprinkled with red sugar.

These cookies are named after the Spanish word for dust, and that’s exactly how crumbly they are. The versatile shortbread dough can be used to make a number of different shapes, including polvorones de nuez, or Mexican wedding cookies or galletas de boda, which are made with ground walnuts or pecans, then rolled in powdered sugar.

This candied fruit-studded sweet bread (“king’s ring”), which is made in celebration of Epiphany (January 6), is formed into a ring and baked with a small baby doll inside to represent Jesus. The person who gets the baby in their slice must throw a party on the Feast of the Candelaria (February 2).

This bread is similar to a bolillo roll, but it is flatter and softer, which makes it a better option for making tortas.

South Side Jillz Place Off to a Great Start