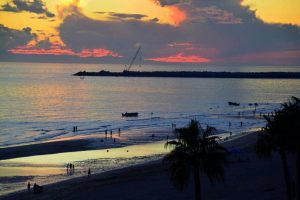 Funding delayed after new state government took office. Sonora government officials say they are clearing up problems left by the previous administration in preparation for releasing more funds for the construction of a cruise ship home port in Puerto Peñasco.

Construction of the facility, which consists of a one-kilometer jetty, terminal buildings and a pedestrian walkway at Sandy Beach, was halted by the new state government which has claimed the previous one had not met federal government reporting requirements.

It is one of many claims made by Institutional Revolutionary Party Governor Claudia Pavlovich regarding her National Action Party predecessor, Guillermo Padrés, who is under investigation in connection with missing funds.

But a meeting last week in Puerto Peñasco, was given assurances that Governor Pavlovich and the Federal Government, which is funding the port, are on board.

Work was forecast to resume within 30-60 days.

The home port also came up last week at Tianguis Turístico in Guadalajara, where the coordinator of the state’s Tourism Development Commission said the project would be “transcendental,” bringing cruise ships that would serve the northwest region, the state of Sonora and the country as a whole.

Antonio Berúmen said cruise lines such as Carnival, Holland America, Royal Caribbean and Princess have expressed interest in the port.

The market for the port extends beyond Sonora and into Arizona, California and New Mexico.

Its construction cost was estimated a year ago at 1.4 billion pesos, or US $93 million at the time. Construction began in 2013 but several delays have slowed things down. It had been expected to begin operating during the first half of this year.

In 2011 Mazatlán had been under consideration as the site of such a home port, but the plan was scratched after an upturn in violence.