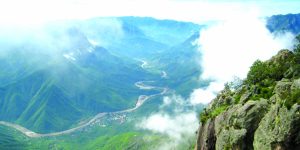 People often ask for a list of ‘must-see’ places to visit in Mexico. No such list would be complete without inclusion of one of the most breath-taking travel experiences Mexico has to offer: Barrancas de Cobre – Copper Canyon – an area of outstanding natural beauty situated in north-western Mexico.

The ‘Copper Canyon’ is actually a series of twenty canyons, formed over the years by six rivers. The area is about seven times the size of the Grand Canyon, and has distinct topography, flora, and fauna to Arizona’s premier natural wonder.

The most popular – and best – way to travel into the canyon is by making use of the remarkable railway which traverses this rugged wilderness. Opened in 1961 following decades of construction, the line is an extraordinary feat of engineering in its own right.

The railway was originally devised to connect the commercial Pacific sea port at Los Mochis to the central colonial city of Chihuahua. A remarkable feature of the line is that it begins at near-sea level on the Pacific coast, rises to an altitude of over 8,000 feet and then declines again to an altitude of around 2,500 feet. The incline of a railway track cannot exceed fifteen degrees, so to accomplish the ‘climb and descent’ the engineers needed to construct bridges, burrow many tunnels through the mountains, and use ‘switch-back’ stages in order to complete the route.

By the time the railway was finished, engineers had laid over 390 miles of track crossing thirty-nine bridges and traversing eighty-six tunnels: the longest bridge runs for a quarter-mile, and the longest tunnel for nearly a mile.

Two first-class trains begin the journey across the canyon: one starting in Chihuahua City and the other in Los Mochis. They meet, roughly half-way, near Divisadero station, which is also a base for most of the canyons’ hotels, lodges, and tours.

The most scenic and dramatic areas of the canyon are on the west side so, to take advantage of the daylight, it’s generally accepted that the train traveling west to east – from Los Mochis towards Chihuahua – is a better sight-seeing option than the one traveling east to west.

Seasonally, May and June tend to be the driest months in the canyons. July to November are months when the rains are most abundant and the canyons’ flora show-off their deepest greens. Between December and May, the flora’s colors are in transition between the wet and dry seasons.

Although the train journey begins in Los Mochis, most tour visitors board the train at its first main stop situated in the beautiful colonial town of El Fuerte, which is about an hour’s drive from Los Mochis, the city which most people fly into to take the train. When you arrange your visit to the canyon using a tour company, there will be a driver and vehicle waiting to meet you at the airport.

You can take the train straight through to Chihuahua City and simply see the canyon ‘in passing’ on the train. However, to properly experience the canyons, and get the most out of a visit to the region, explore the various tours on offer and arrange to stay at one of the hotels or lodges in the canyon itself (the more adventurous can camp in the canyon) and, from there, participate in some of the wonderful outdoor activities on offer.

For detailed information about the Copper Canyon, including local knowledge about the area, best times to travel, the train journey, the attractions and activities on offer, connect to our comprehensive Guide to Mexico’s Copper Canyon.