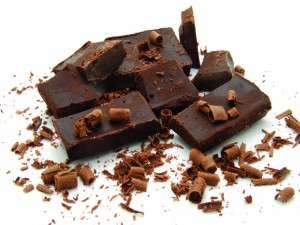 Based upon evidence derived from chemical analysis of the residues found in pottery vessels of Mesoamericans, the drinking of chocolate beverages dates back to at least 3,500 years ago. The Olmecs were the first to cultivate cacao, the plant we call chocolate. Mayans referred to chocolate as cacao, as well, but the Aztecs called it xocolatl (ho-co-la-tol) meaning bitter liquid in Nahuatl, their native language. The Maya liked to drink it warm; the Aztec preferred it cold especially in hot weather.
Among the Olmec and Mayan Civilizations most of the population drank cacao. In Moctezuma’s time it was reserved for Aztec Lords and Priests due to its high value as it was imported long distances from the lush jungles of Central and South America. The Aztecs used the beans as money and as offerings during religious ceremonies. One of the conquistadors, Bernal Diaz del Castillo was an eyewitness at a dinner in 1520 with Moctezuma. He wrote that the king drank from cups made of pure gold. It was noted by the conquistadors that soldiers who drank the liquid could walk long distances and go an entire day without eating anything else. Moctezuma was known to drink many cups a day.
The Aztecs made an alcoholic beverage, called chicha, from the fruity pulp surrounding the cacao beans. The drink may have had up to 5% alcohol by volume. It is not clear if the unfermented drink was drunk with or only without alcohol or was prepared in a concoction of fruit and cacao. It is known that the drink was served with flavorings of what we call allspice, vanilla, chili pepper, coriander, sage, black pepper, honey or the sweet juice of the agave plant and/or several different types of flowers. Among the flowers are included magnolia, goosefoot which is related to spinach and the spicy petals of the custard-apple tree. The most popular was a flower called either: hueinacaztle, teonacaztli or xochinacaztli (great ear, divine ear or flowery ear) respectively. Maize was also added sometimes as either a binder so the cacao didn’t separate or for gruel.
The process consisted of fermenting the cacao beans, drying them, roasting them and grinding and adding very, very hot water making a bitter suspension that was thick. During the process it was filtered several times while adding more hot water. It was drunk as a liquid and/or frothed and served in different drinking vessels to accommodate the foam head.  The drink was usually served in spouted bottles, color-decorated bowls and gourds.
The Aztec used chocolate to treat complaints of the stomach and intestines by combining it with a liquid extract from the bark of the silk cotton tree. Chocolate was also used to treat infections, to lower fevers and prevent fainting. The Conquistador Francisco Hernandez de Cordoba remarked that the chocolate drink “gives an agreeable taste, is tonic, warms the stomach…combats poisons and alleviates intestinal pains and colic.”
Unprocessed cocoa contains epicatechin, a strong antioxidant that mimics the action of insulin and can improve heart health by inhibiting platelet aggregation. Based upon research of Dr. Norman Hollenberg of the Harvard Medical School, he found that cocoa lowers the risk of heart failure, stroke, cancer and diabetes. Epicatechin is also found in green tea. Epicatechin is removed from commercial cocoa because of its bitter taste. It is possible to find raw beans and unprocessed cocoa in some market places. Besides being one of the best antioxidants, cocoa is also rich in caffeine.
The highest quality of antioxidants comes from coco powder, followed by dark chocolate and lastly milk chocolate. It is believed milk may actually inhibit the absorption of antioxidants from chocolate.
Como agua para chocolate comes from the Spanish/Mexican language; an idiom referring to the very “hot” water needed in the preparation of chocolate; for anything possessing a lot of hot passion, as in a hot relationship, a hot situation or a hot discussion, etc.