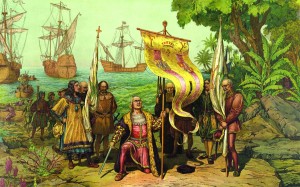 Have you ever asked yourself what was the opportunistic motivation for Queen Isabella and King Ferdinand of Spain, in 1492 CE, to fund Christopher Columbus’ ocean voyage to the west? In one word “spices”; the most valuable commodity in the world, at that time, equal to if not more valuable than gold. Prior to the invention of refrigeration, herbs and spices were used to preserve food. They were also used to flavor food and wine, make perfume, used for incense, and for the treating and prevention of diseases. The revenues derived from spice was a driving force in the global economy, as oil is today. Wars were fought over control of trade routes; civilizations rose and fell, and thousands of years of cultural interactions had their bases in the lucrative spice trade.
The history of spice and herbs spans millenniums. Evidence has been found in petro-glyphs substantiating its importance as far back as the Neolithic stone age. Reference to the spice trade is mentioned in the Hebrew Bible, in the story of Joseph with the coat of many colors. According to the book of Genesis, Joseph’s jealous brothers sold him to spice merchants who were traveling to Egypt. Circa 400 BCE, Hippocrates, the father of medicine, catalogued medicinal uses for over 400 herbs and spices; many of them are still in use today.
Most spices came from China, India and Africa. The trade route was called the Silk Road and covered over 4,000 miles in a combination of land and sea treks east to purchase the precious products. Spice had to be transported overland by camel caravans; making it very expensive. Many middle men made great fortunes.
The country that controlled the spice trade controlled the world. The Arabs controlled the Silk Road from 3000 BCE to about 200 BCE. The Roman Empire took control of the trade from about 200 BCE to around 1200 CE. Roman traders sailed across the Indian Ocean from Egypt to India for pepper, cinnamon, nutmeg, cloves and ginger. It is said that during the 300s CE, Rome, when attacked by Barbarian; the Romans negotiated with the invaders to leave the city unharmed in exchange of a tribute for an enormous amount of pepper. Muslim traders controlled the trading routes throughout the Indian Ocean between 1000 and 1500 CE.
In Europe, circa the 1300s CE, nutmeg was so valuable that a pound was of equal value to seven oxen. During the Middle Ages, a pound of ginger was equal to one sheep and a pound of cloves would buy seven sheep.
Sometime during the 1400s CE, the Ottoman Turks controlled the roads to the east. The Ottomans, hated the Europeans resulting in cutting them off from traveling to India and China. By 1453 CE, Arabs completely took over the trading from Venice; the main western market at that time. The prices were so high by then that only the very rich could afford to buy them. It became evident that Europe needed an alternate route to India. Spanish and Portuguese explorers set sail. Vasco de Gama, from Portugal, was the first European to sail around the southern tip of Africa all the way to India; reaching Calcutta in May of 1498.
Christopher Columbus persuaded the monarchs of Spain to underwrite his plans. He believed that India lay just across the Atlantic Ocean and would reach it by sailing west. Thinking that the journey would fail, the King and Queen only agreed to give him 10% of the profits. Unfortunately, he bumped into the Americas instead and called the native people Indians, believing he had successfully arrived in India. Fortunately for Spain, this accident spurred their world domination, making them the richest country in the world.
Herbs and Spices are still very useful today, but not nearly as expensive. India is known for the holistic health care system of Ayurveda; its practitioners employ the use of herbs and spices. The system must work, since they have been doing it for over 5,000 years.