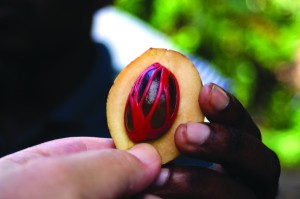 Besides pepper and cloves, there was a third spice which helped usher in the discovery of the Americas and an alternate route to the East that previously had only been accessible by a long overland journey on the Silk Road; nutmeg. Nutmeg is a seed that comes from the Myristica Fragrans, an evergreen tree, native to the Banda Islands of Indonesia. The flowers give off a distinct aroma and produces a fruit with 3 layers. The outer layer is used for jelly, then a red membrane known as mace and the nutmeg seed. Nutmeg is more pungent and sweeter than mace. The tree takes seven to nine years to bear fruit after planting it; can grow to sixty feet and can produce for up to ninety years.
In Arabic writings nutmeg is mentioned as an aphrodisiac. During Medieval times it was used in cuisine and for self-abortions. Believed to ward off and cure the plague, in England, it was worth its weight in gold. In the fourteenth century the cost of a kilogram of nutmeg was as much as three sheep. In the fifteenth century the Portuguese discovered the route around the Cape of Good Hope in South Africa to India, making transportation cheaper by ship rather than over land. The Dutch took over the spice trade from the Portuguese in 1602; they waged bloody wars, and in 1621 massacred or deported the inhabitants of Banda to maintain their hold on the monopoly. The Dutch would burn trees to artificially keep the value of nutmeg high. They dominated control of the Spice Islands until World War II. A story about a Dutch official, who did not know the tree produced mace and nutmeg, told the natives to plant more mace trees. England gained some control of the trade during the Napoleonic wars; planted trees in Grenada and Zanzibar; increasing the production and thereby lowering the cost.
Indian Vedic writings recommends nutmeg for the management of bad breath, headaches and fever. The Greeks and Romans used nutmeg as a tonic to stimulate the brain; helping to eliminate fatigue and stress. In ancient Chinese medicine it was used to treat inflammation and abdominal pain caused by digestion-related problems like diarrhea, constipation, bloating and flatulence. Nutmeg may reduce the suffering from aching joints, muscle and arthritis pain by applying its oil. Because of its antibacterial properties it can be effective in the treatment of bad breath, several skin problems and as a preservative agent. It may also be effective for detoxifying the liver and kidneys.
In low doses, nutmeg produces no noticeable physiological or neurological responses. In large doses it is toxic and can have psychoactive effects. It can cause nausea, convulsions, headaches, and delirium. Nutmeg poisoning can be deadly to pets and livestock. In 1883 a report mentioned that the Hindus of West India were taking nutmeg as an intoxicant. Ground nutmeg is smoked in India. Students, alcoholics and prisoners consider it a “semi-drug”; Malcolm X wrote in his book that he consumed nutmeg while serving time in prison. Large doses can induce abortions.
Nutmeg adds flavor to eggnog, puddings, cookies, cakes, muffins and fruit and pumpkin pies. Nutmeg can be sprinkled on whipped cream and Caribbean style drinks. Mace can be used to create a saffron like orange color to foods like rice. Industrial uses for the oil derived from nutmeg as an ingredient is included in the manufacturing of perfume and pharmaceuticals. The country of Grenada now produces almost a third of the world’s supply and has an honored place for it on their flag. In Spanish, nutmeg is called Nuez Moscada and the whole seed can be purchase at Guadalupana Farmacias for a reasonable price. Nutmeg should be stored in a cool, dark, dry place. This article is for information purposes only and should not be taken as medical advice.

The End of One Oppression and The Beginning of Another