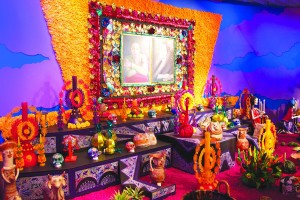 It may sound morbid to the non-Mexican, but the Day of the Dead is a Mexican festival for relatives and friends to come together and celebrate the memory of their loved ones who have passed away. It is believed that on the Day of the Dead, it is easier for the soul of the departed to visit with the living. The family usually gathers at the cemetery to clean, paint, make repairs, if necessary, and decorate the graves. Marigolds and red cockscomb flowers are placed lovingly along with the deceased’s favorite foods and beverages, even tequila, at the grave. The flowers are thought to attract the souls of the dead to the offerings. It is believed that the spirits of the dead eat the “spiritual essence” of the food. Photographs of the deceased, candles, water for them to drink, and a blanket so they can comfortably rest after their long journey are just some of the things that might be left for them.

Sometimes the family will leave toys for their dead children, the Los Angelitos or the Little Angels. It’s not unusual for the whole family, including the children, to have a barbeque or a party accompanied with live music at the site. Some people will spend all night visiting in the cemetery with the departed souls. The intent of the living is to encourage visits by the souls, so that the spirits will hear the prayers and the comments being directed to them.

Dia de Los Muertos coincides with the Catholic holy days of All Saints Day and All Souls Day, November 1st and 2nd respectively. It is believed that at 12 am, midnight of November 1st, the gates of heaven are opened and the souls of the dead are free to return to earth. On the 1st the Saints and the infants and innocent children come back; then on the 2nd all the other Souls are permitted to visit. Even though the Day of the Dead is celebrated on the Catholic holy days it is more of a cultural holiday than a religious one.

Honoring the dead is an ancient festival that goes back 2,500 to 3,000 years ago. It was practiced by the Olmec, Mayan, Aztec and other indigenous people of Mexico. In the Aztec tradition the festival was dedicated to the goddess, Mictecacihuatl, the Queen of Mictlan, the underworld, where she and her husband, Mictlantecuhtli, rule the afterlife. She is now called Catrina, the Lady of the Dead. Her role then and now is to keep watch over the bones of the dead. The original Aztec festival was sometime around the beginning of August and celebrated for an entire month. Since the introduction of Catholicism the holidays have been combined and are celebrated together.

Besides the food and music, some families display photos and other decorations of skeleton art and trinkets. During this time of the year the markets carry sugared skulls which can be decorated with Royal sugar icing, the type used for gingerbread houses. Sugar Art was brought to the new world by the Italian missionaries in the 17th century. The indigenous people learned quickly how to use it for their festivals. The skull represents the deceased loved one and their name may be placed on the forehead along with other facial features and colorful adornments. If you wish to see some examples of decorated skulls you can see them at www.mexicansugarskull.com. Also, during this time there is a delicious baked item called Pan de Muerto, Bread of the Dead. The sugared skulls and the bread are only available for this seasonal festival. I encourage you to take a trip to the local supermarket and investigate these items, if you are in Mexico around the end of October.