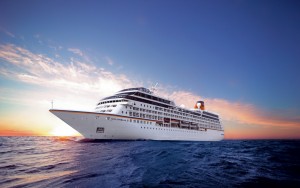 How can a guy living in the deserts of Arizona be seriously considered as being relevant to the discussion of cruise ship design and safety?

Two answers: He can’t or he’s some kind of genius.

Actually, there is a third response which is probably closer to the truth — he’s an interested observer with an exceptional natural capacity of intellect and ship construction curiosity.

But I could be wrong. Sometimes I overestimate my capabilities; a fact the wife often reminds me of.

When I first learned of a proposed cruise ship port in Puerto Peñasco my first reaction was how could it be possible, considering the relatively shallow waters of the area and extreme tide swings of the northern gulf.

Then, talk of building a lengthy pier began circulating among the community. A pier long enough to reach sufficiently deep water to allow ingress and egress of large ships. Without such a means passengers would have to be ferried to shore and back. A time consuming and inconvenient process.

Coincidentally, the largest pier in the world is also located in Mexico. The cast concrete Terminal Remota in Progresso, Yucatan, juts out four miles into the Gulf of Mexico. Both cruise and container ships load and off-load onto it.

It is not a particularly difficult task to construct lengthy piers, causeways or roads over relatively shallow water. The 100 mile Florida Keys highway is evidence of this.

Accepting the local pier issues have been resolved, there is the question of modern cruise ship design and safety.

In February 2013, the crippled Carnival cruise ship Triumph stalled in the Gulf of Mexico when an engine-room fire paralyzed the vessel. For several days passengers and crew were adrift without running water, endured sewage flooding and no cooling or cooked food and slept on deck to avoid the stench and foul air inside. Approximately 4,200 individuals aboard ship were later towed into Mobile Bay, Alabama. The mishap was later referred to by the passengers as the “Poop Cruise.”

A year previously, Feb. 2012, another Carnival vessel, the Costa Allegra, also caught fire in the Indian Ocean off the coast of Africa and left the ship without power for three days. Like the Triumph, it was eventually towed to port.

The January 2012, Costa Concordia calamity — an Italian cruise ship which capsized and partially sank after striking an underwater object, resulting in the deaths of 32 passengers and crew — immediately spawned talk of ship safety and design of large passenger cruise liners.

The Costa Concordia was carrying 4,252 people at the time. A large ship, but no where near the size of Royal Caribbean’s Oasis of the Seas and Allure of the Seas. Each of these vessels can carry more than 8,000 passengers and crew.

Surprisingly, the primary issue with these giant ships is not mechanical failure but stability.

Modern ship construction has placed more and more passenger cabins and recreational facilities above the water line while at the same time decreasing the depth and counter weight balance of the hull below the water line. Such design permits the ships to enter the shallower waters of the Caribbean islands and certain ports in Mexico and Belize.

Almost unfathomable, some of these mega-ships can be seventeen stories high and over a thousand feet long with only 20-30 feet submerged below water. Obviously, a structure of this size is prone to being constantly buffeted by surf and wind.

To compensate for their inherent top heaviness, ship builders have installed huge stabilizers onto the sides of the hulls. A sort of wing underwater. Depending upon ship size, there can be two to four of these devices. Something called an “air draft,” also stabilizing equipment, is located above water. Together, these apparatuses work in unison to help the vessel stay level and upright.

But at what point does a ship’s design begin to threaten its structural integrity, stability and safety? As the cruise ship industry demands larger and larger vessels to carry more and more passengers to generate more and more revenue, there seems to be a point when making more dollars and cents no longer makes more sense.

Already the cruise lines routinely face lawsuits over safety, cleanliness and performance. What would the size of a lawsuit be if one of these super ships were to lose power and control, resulting in a major catastrophe? Without the ability to steer and stabilize itself, the vessel could severely list to its side, possibly toppling over. It would not take a very high wind or rough sea to do it.

Of course, insurance will cover a large portion of the accident, but then the cruise company’s rates are increased.

Costa Concordia was one of the largest salvage endeavors in maritime history. It took ten months to refloat the ship and tow it to Genoa, Italy where it was dismantled and sold for scrap.

Fortunately, the Sea of Cortez is basically an inland body of water, not usually susceptible to adverse oceanic surface and weather conditions. For the most part, the water is relatively serine and when stormy weather does occur, wave and wind conditions do not mimic the violent extremes of ocean disturbances. The few instances of damaging weather is usually the result of violent storms spawned in the Pacific which lapped over the Baja Peninsula and slammed into the mainland. Even then, the intensity of the storms are usually diminished by the time they reach the Sonoran coast.

In defense of the cruise ship industry, I’ll admit most of their vessels are not intended for trans-ocean voyages. Sailing along the tranquil shores of continents and nearby islands cannot compare to cruising in thousands of miles of open water. A ship in need of assistance in the Caribbean, Alaskan inland waterways or the Sea of Cortez is in a much more advantageous position than a stranded vessel 1200 miles from anywhere.

Still the question remains — are today’s gargantuan cruise ships safe or are they just floating disasters waiting to happen?