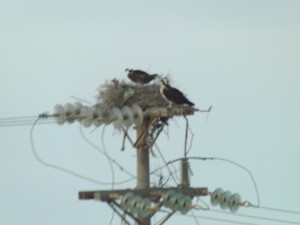 I’m not much of a fisherman, but I know someone who is. In a recent trip to Puerto Peñasco, Sonora, Mexico – also known as Rocky Point – I witnessed a guy fishing without a pole, hook, bait or even a boat. Yet, he managed to reel in a fish as easily as a commercial trawler with immense submerged nets.

Actually, the fishing guy wasn’t really a guy, but a male Osprey, a large raptor sometimes called a sea hawk, fish eagle or fish hawk. An Osprey can weigh up to five pounds, measure over two feet in length, and have a wingspan of 50 to 70 inches. The females are slightly bigger than the males.

In my nearly forty years of visiting Mexico, I have never seen this bird up close before. A pair was busily constructing a nest atop an electric power pole adjacent to the RV Park my wife and I were camped in.

They had their work cut out for them, as nature can sometimes throw a wrench into the best of plans. Having nearly completed the nest and with the female already beginning to sit, a sudden sand storm rolled in and nearly destroyed their home. Most of the nest was blown away, leaving only a few larger sticks and other construction material still attached to the pole.

When the storm was over the birds were also gone, and I thought that was the end of it. However, a couple of days later they returned and began reconstructing the nest. The male would make multiple trips into the surrounding area, returning with newly acquired sticks, seaweed and even plastic bags. After a few days, the renovated nest was as large as the original and the female resumed her motherly duties.

I would learn later that Ospreys mate for life and often reuse the same nest for years. Typically, the female lays two to four eggs and incubates them for about five weeks.

In spite of all the nest building activity going on, the head-of-household still has to find time to feed his family. Between his construction chores, the male would occasionally venture out to sea in search of a tasty fish. With extra keen eye sight, an Osprey can spot a fish from a hundred feet in the air, swoop down and snag it with specially adapted talons that prevent the fish from escaping. 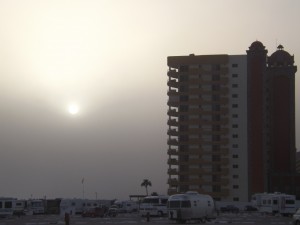 But, that’s not the end of the hunt – he still has to transport the lunch back to the nest. Not an easy thing to do. Depending upon the size of the fish and distance from the water, he will consume a lot of energy just trying to keep meat on the table.

Then, as in many life forms, there is always someone trying to steal or mooch from his catch-of-the-day. In one particular incident, the Osprey was perched atop another power pole, fish in hand, when a couple of smaller birds began eagerly attempting to pilfer his food.

Working in unison, the little birds would dive and taunt the Osprey, hoping to distract him enough that he might carelessly drop the fish onto the ground where the other birds could quickly feast upon it. Their ruse failed, and after several minutes of back and forth sparring, the Osprey left the pole and returned to the nest to deliver the fish dinner.

The Osprey is a physically impressive looking animal. A Wikipedia description indicates “The upper parts are a deep, glossy brown, while the breast is white and sometimes streaked with brown, and the under parts are pure white. The head is white with a dark mask across the eyes, reaching to the sides of the neck. The irises of the eyes are golden to brown, and the transparent nictitating membrane is pale blue. The bill is black, with a blue cere, and the feet are white with black talons. A short tail and long, narrow wings with four long, finger-like feathers, and a shorter fifth, give it a very distinctive appearance.”

Apparently, it is also rather common, being the second most widely distributed bird of prey worldwide, following the Peregrine Falcon. Found in temperate and tropical regions of all continents, except Antarctica, the Osprey can be seen hunting coastlines, inland rivers and waterways, lakes and just about anywhere a supply of fish can be found.

They will sometimes devour rodents, small rabbits, various reptiles and other birds, but fish make up over 90 percent of their diet.

Unlike their migratory cousins in colder regions, Ospreys in warmer climates often remain in the same general area as long as there is an ample food supply. Since the Sea of Cortez is an abundant source for fish, I suppose I can count on seeing my feathered friends again. At least I hope so.