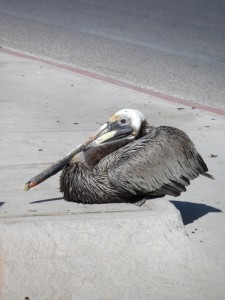 It’s not unusual to see a pelican resting on a boat’s mast, or squatting atop a dockside post or even casually reposing amongst the harbor’s rocky shore line, but when one is spotted nonchalantly roosting on a sidewalk curb – inches away from speeding cars and trucks – one has to wonder “What is this dude thinking?”

After leaving the Kaffeehaus Restaurant and heading into the Old Port area, I was amazed to see a large pelican plopped down on the curb, apparently oblivious to the noise and traffic whizzing past him. He would occasionally stand and stretch his wings, casually look around, then slowly ease back down into the more relaxing position.

Obviously, he didn’t have a care in the world or was contemplating vehicular suicide.

I’ve previously reported various bird stories in the Rocky Point Times – “Fishing With The Osprey,” “Buzzard On A Pole,” “Gull In A Pool” and others – but this is the first time I’ve witnessed a pelican intentionally reclining in such a hazardous location.

Normally, sea birds – as most birds – are somewhat skittish of close human contact, instead choosing to keep a safe distance from what may be perceived as a perilous situation. Unless the encounter involves something worth taking a risk for food.

As it turns out, this was exactly the case in this particular instance. Several street side shrimp and fish vendors were busily hawking their goods along the road leading into the Malecon. And as usually the case, where there’s shrimp and fish there will be pelicans and gulls close by.

It a basic rule of nature: A handout always beats having to work for it – Even if it means endangering life and limb.