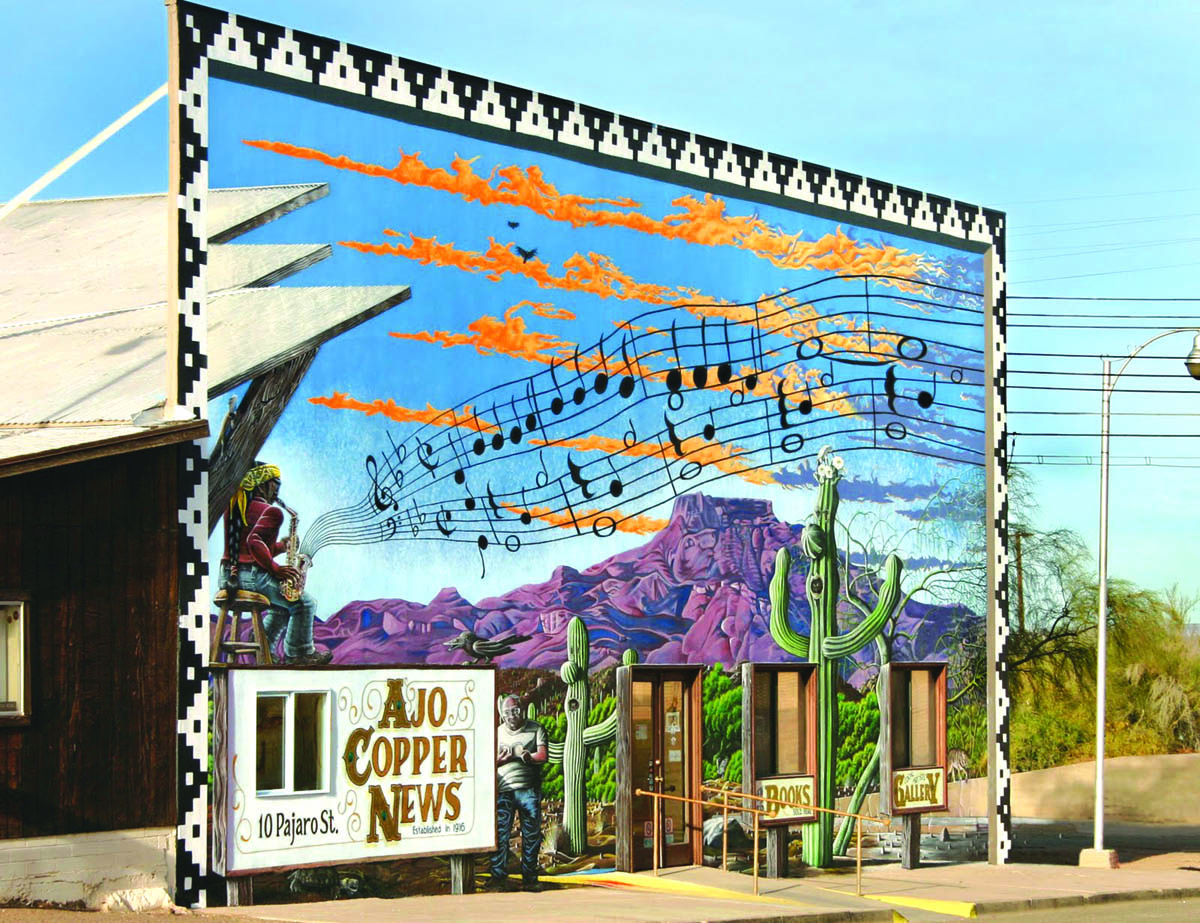 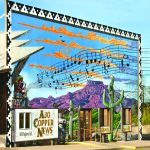 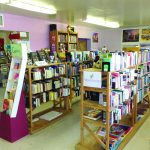 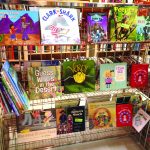 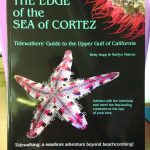 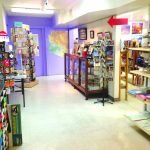 People driving through Ajo may notice a store just off the Plaza (between the Plaza and the Elks Lodge) with a huge mural and wonder what it’s all about. The building houses the Ajo Copper News — Ajo’s weekly newspaper — and the Copper News Book Store. While the mural and the bookstore are only a few years old, the newspaper has just celebrated 100 years in business.
The first issue of the Ajo Copper News bore a dateline of April 29, 1916, making the publication one of the oldest businesses in Ajo.
Renwick White, encouraged by John C. Greenway and Mike Curley, founded the newspaper in March 1916, and published the first official issue in April. The first office was located in Clarkston, just east of the present Ajo, and later was moved to Ajo. The paper was owned by Ted Beggs, Geraldine Beggs, George Gable, and then Barry Gable before Richard F. & Ann Hollister David bought the Ajo Copper News in 1967 and served as publisher and editor respectively. When they retired in 1983, their son and daughter, Hollister J. “Hop” David and Gabrielle David, took over as publisher, editor and owners, positions they still hold today. Their brother Joseph David is a partner in the business.
The Copper News Book Store was started in 2010 and is located in the newspaper office at 10 Pajaro Street. Along with a great selection of new and used books, it carries basic office supplies, greeting cards, maps and gifts. The store stocks all the best sellers, has a large selection of Arizona and southwest books along with a large selection of biographies. Most used books are priced at less than $10, however some sell in the hundreds of dollars.
“One of the most popular books is The Edge of the Sea of Cortez, Tidewalkers’ Guide to the Upper Gulf of California. It has been out of print, but is now available at the Copper News Book Store, and is “a must for those who like to walk the beach,” says bookstore manager Dick Ducic, who joined the newspaper staff as a proofreader but used his knowledge of books to enlarge the bookstore area. He not only keeps best sellers and an eclectic selection of other books on hand, he also tracks down books people want and haven’t been able to find on their own.
When the current location of the newspaper and bookstore was purchased, it was the goal of Hop David, (the artist, also the publisher) to have a mural on the front of the building. That dream came to fruition, when in 2012, Hop completed the current mural with the help of another local artist, Mike “DaWolf” Baker as part of ASAP (Ajo Street Art Project). It is now one of the “must see” tourist spots in Ajo and is best viewed from the painted footprints on the corner of Pajaro and Highway 85 by the tiny park in order to get the complete effect of the trick-perspective mural. The Native American figure playing saxophone in the mural is a Tohono O’odham musician — the notes emanating from the instrument are “Ghost Riders in the Sky”, a popular chicken scratch tune. Those who spend a few minutes gazing at the mural will see the ghost riders and cattle in the clouds along with dozens of other hidden pictures in the mural.
Need something to read on the beach or forgot your book? -stop by and see us. We are the only bookstore between Phoenix and Puerto Peñasco!
The Ajo Copper News and Copper News Book Store, 10 Pajaro St., Ajo
Hours: Mon. – Fri. 10 a.m.to 5 p.m. (520) 387-7688 email: dickd@cunews.info. 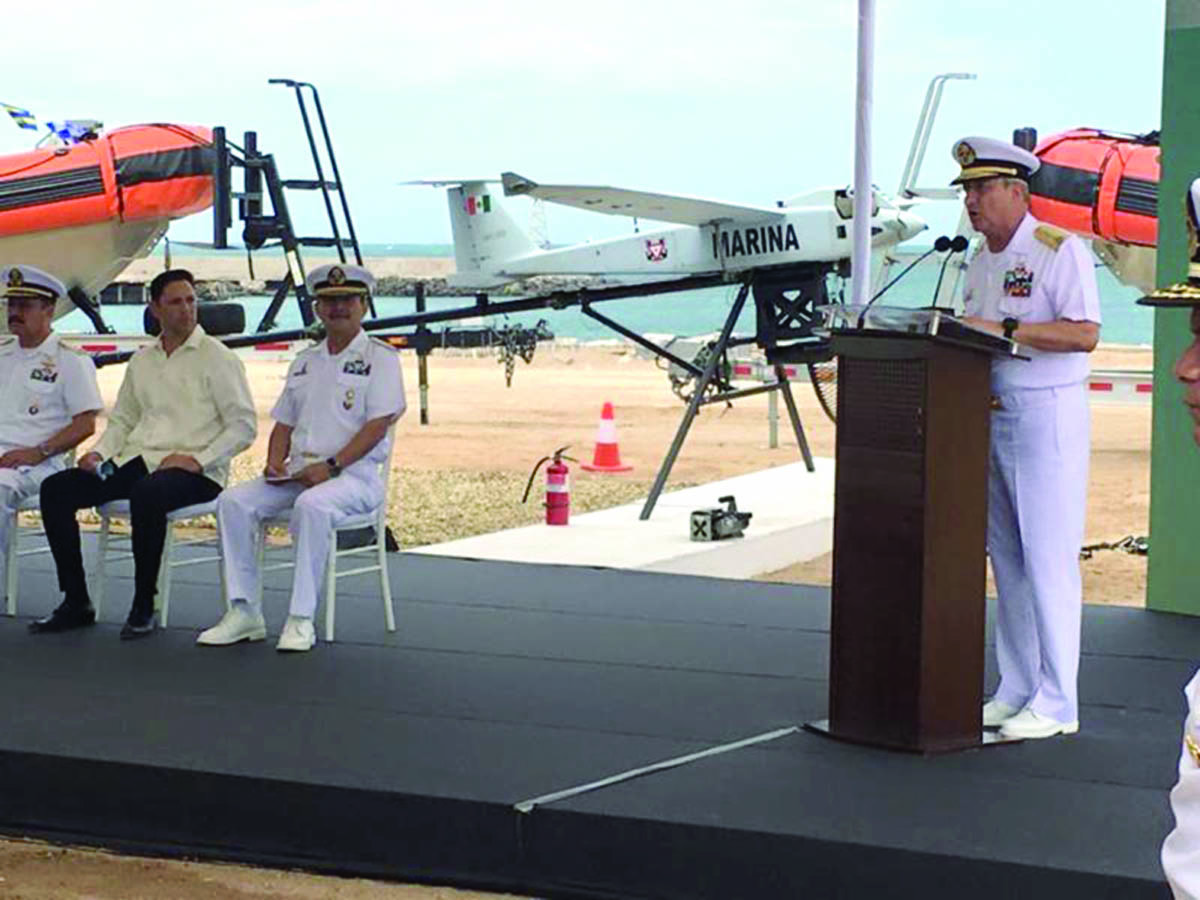