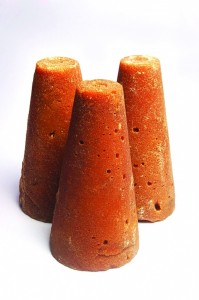 Sugar comes from a perennial grass that produces multiple stems; each stem grows into sugarcane; sucrose accumulates in the stalk. Sugarcane is native to the temperate and tropical regions of Southeast Asia. When the farming of sugarcane started is still unknown. One theory is that domestication began many thousands of years ago. It’s believed that Arab traders brought the sugar from Asia to other parts of the known world, including Andalusia, an area located on the Iberian Peninsula of southern Spain. The Greeks referred to sugarcane as “the reed that produces honey without bees”. Europe considered it an expensive spice from the east until around the 18th century. The Andalusians are credited with bringing the sugarcane to the New World soon after the discovery of the Americas.

The cane eventually was grown and processed in large Haciendas in Mexico; worked by the indigenous Indians and Black Slaves. After the Mexican Revolution sugarcane continued to be an important crop and today employs about 2 million people in one way or another. Mexico ranks among the top 6 producers of sugarcane in the world; mostly grown in the Veracruz region; sugarcane is the second largest crop produced, following corn. The sugar is used by rum distilleries in Mexico and sugar-alcohol is blended with tequila, which is not made from 100% agave.

Piloncillo, also called panela and panocha, in Mexico, is the purest form of unprocessed raw sugar. The juice from the crushed sugarcane is boiled and then poured into blocks or cone shaped molds of various sizes. It comes in dark (oscuro) and a lighter color (blanco). The flavor is caramel, earthly and smoky; retaining the molasses and the nutrients found in the natural state of the plant. The nutrients include Phosphorus, Calcium, Iron Magnesium and Potassium, besides being only 11 calories a teaspoon. You can find piloncillo in Mexican markets. In this solid state it must be grated or shaved in order to use it in recipes. One popular drink made with piloncillo is Café de Olla; the sugar is mixed with brewed dark-roast coffee, cinnamon and aniseed.

Do not confuse raw brown sugar with commercially sold brown sugar found in boxes at the supermarket because the latter is white refined sugar with molasses added for color. Further heavy processing of raw sugar produces white sugar devoid of nutrients and contains harmful chemicals, such as Phosphoric Acid, Sulfur Dioxide and Formic Acid.

Alternative substitute artificial sweeteners have numerous side effects and are dangerous and toxic. Dependable research has shown side effects may include blood and brain cancers, migraine headaches, diarrhea, bi-polar related disorders, insomnia, weight gain and Alzheimer’s, among other serious health issues.

We all have heard that too much sugar is bad for you. If the reader is interested you should go to http://www.rheumatic.org/sugar.htm and read the 146 reasons why you should not to eat excessive amounts of sugar.