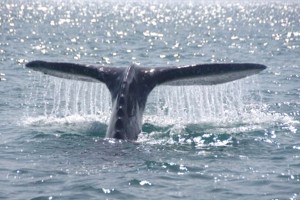 Well it is both. Twenty of us led by Russ and Naomi of Peñasco Recreation headed for Baja California Sur and the lagoon where the baby whales are born. Eight members of this band of twenty were the Peñasco Payasos (clowns), so named during a previous adventure with Peñasco Recreation to the San Felipe Blues and Arts Festival. As before, we managed to put a smile on the face of many a Federale at the check points by declaring that was who we were.

I am afraid the photos won’t show very well in news print, so if you want a better look, go to www.penascorecreation.com.

This is the last installment of the story on our Whale Watching Trip. I covered our trip to Baja California Sur and our trek across the Baja from the Pacific to the Sea of Cortez. I said I would tell you about Coco’s Corners. So here it is.

In the middle of our trek across the Baja is a place called Coco’s Corners. I really do not know what to call it or how to describe it. It contains an open air structure (sort of) covered in souvenir underwear. You can buy drinks and use the outhouse after signing the owner’s guest book with your name and city of birth. This book is such a treasure with thousands of names of people from all over the world. For some unknown reason there is a semicircle of old toilets sitting there so, of course, we had to have a picture!!

After reaching Gonzaga Bay we turn North to our last stop, San Felipe and back to a paved road – yea! We check into our favorite hotel, George’s, and all head off on shopping/eating expeditions. It was Valentine’s Day and we had a great dinner at a place called The Sweet Spot. Their specialty is BBQ – but for this day they had a special cheese and shrimp stuffed chicken breast dinner (wonderful) with rice pilaf and roasted vegetables. It also included a beer or margarita, a chocolate and strawberry desert and a rose for the ladies. Some of us were there and others at the Steak House, El Nido, next to the hotel. Sweet Spot has the water view and we were treated to a fabulous moon rise.

Moonrise from the Sweet Spot Patio on the San Felipe Malecon

The next morning before heading for home, we had breakfast at the restaurant at George’s Hotel. Of course the Payasos had to make an appearance, so some of us donned a bit of our “costumes”.

I will never stop saying – I love Mexico and love to travel and see different parts of it. I urge you to get out and explore this wonderful country. There is so much diversity and history and everywhere you go the people are so nice. If you are not comfortable doing it on your own, get some friends together, or contact Russ at Peñasco Recreation and see what trips he has coming up or what trips he can put together especially for your group.

I’ll end this story with some more of the things I could not write about so you can just imagine the fun we had: The failed Segunda Mutiny and last but not least Dick talked in tongues this time in his sleep! So get out there and have some fun in Mexico.