Sea of Cortez-Search and Rescue by the Mexican Navy

“Just sit right back and you’ll hear a tale

a tale of a fateful trip,

that started from this tropic port,

aboard this tiny ship.”* 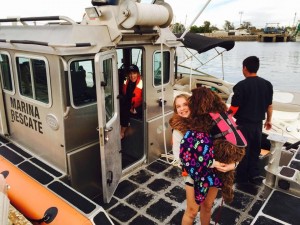 Last month in Puerto Peñasco we almost had a real life remake of the Gilligan’s Island Castaways being lost at sea. Yes, there were even seven on board, six humans and one handsome boat dog named Truffles, who ended up with engine trouble and if not for the Mexican Maritime Search and Rescue Unit, well, who knows.

Most boaters are unaware of a division of the Mexican Navy that exists in Puerto Peñasco Mexico. If you run into trouble in the Sea of Cortez, there is a Maritime Search and Rescue unit (SAR). This SAR Unit is under the Mexican Navy and is responsible for improving the quality and effectiveness of the Navy’s response to Mexico’s maritime emergencies.

This group of seven American castaways were on a whale watching trip on a boat, ASDIP, a 23 ft. Sea Ray. The whale spouts were spotted about eight miles out and the group, despite the wind picking up, set their sites on the horizon and cheered happily at the whale encounter. As in all good boat stories, the wind picked up, the waves started rolling, and the engine started making noise and the boat shut down. Attempting to contact a friend on a sailboat, the friend Captain Bill Hensler, contacted Villa in Cholla at the Radio Shack, and he contacted the Marina Rescate based at the Naval station in the harbor.

Darren Tosetto and Ed Brockmeyer, both boat owners on board were surprised at the quick response and the great experience of the SAR unit. Tosetto states, “they were extremely professional, fast, attentive and engaged to make sure everyone was OK.” Molly Tosetto, the only teenager on board at age 13, remarked of her experience, “It was like one of those movies, it was really cool, exciting”.

The group was taken aboard the Navy vessel, and their boat was towed back to Safe Marina by the Navy. Upon return, they filed a report and had a brief meeting with the Port Captain. In the end, they tried to tip the Navy crew, for the outstanding job, and they refused stating it is their duty. Before this event occurred, both boat owners did not know this SAR division existed.

The primary mission of SAR is to provide rescue for those in emergency situations in a timely manner. In the majority of Mexico, there are SAR operations within 50 miles of the Mexican coastline.

So, since we have the SAR Unit, the next Gilligan Islands television series is probably not going to be shot in Rocky Point. (Although any Hollywood producers out there reading this, this classic 1964 American comedy sitcom needs a modern comeback. And if you need a setting how about the beautiful Sea of Cortez?)

The crew of ASDIP says Thanks, Mexican Navy SAR Unit!

For a creative fun video of this rescue go to http://www.examiner.com/article/Rocky-Point-Mexico- boat-rescue-important-info-for-boaters