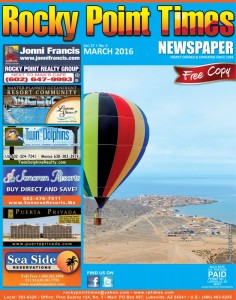 January set the record for being the unusually warmest month and boy was it fabulous here on the Sea of Cortez. The trend has pretty much continued into February so I’m betting on a fantastic (and crowded) Semana Santa and Spring Break.

Lots of stuff coming up in the next few months, so be sure to check out our Facebook Page as well as the Events Section in this issue. March will kick off with the CBSC Game Night at 6pm at the Cholla Clubhouse in Cholla Bay and then we have St. Patrick’s Day to get our fix of corned beef and cabbage. And let’s not forget the HUGE party Sandy will be holding for our own Mario Zepeda. That should be an all-nighter! Easter is at the end of March this year and that will bring on Semana Santa and March should be full of spring breakers and families vacationing. Just a few things going on, but the calendar is packed so have a look and get on down here.

Continuing the Editorial from last month, we left off with Tom and Sandy selling their yellow page directories to Fronteer Directory at the end of the 1980’s, and then heading down to Rocky Point in 1990, on a friend’s recommendation. I’m not sure if they ever left after they pulled their motorhome into Playa Miramar RV Park, which used to be on the beach right next door to Manny’s Beach Club. In fact I think it took them months to think about leaving and then all they wanted to do was go back to Lake Havasu City, pack up the house, put it up for sale and hit the road back to Rocky Point, Mexico. Well, that is pretty much what they did.

While hanging out in Rocky Point at places like Manny’s, Hotel Villa Granada, the Ice House, Mr. Amigos, Playa Bonita, the RV parks and a few local dive bars they made a lot of friends. I would bet that they knew all the Gringos who lived here full time and probably 80% of those who visited. During 1991 they ditched the motorhome (which later became my short-term abode) and established Casa Pequeña, population 2 right on the beach in Playa Miramar RV Park. (This also became my abode after the folks moved to a big house in town.) Back then you got a space for your trailer, took the wheels off (haha) and then built a deck, outdoor baño, tequila patio and maybe even some storage space. People only slept in their trailers back in the day; all other activities such as cooking, socializing, drinking (can be much different than socializing), reading, watching television, etc. was done outdoors. Some of these relics can still be seen around town and some are pretty darn nice.

Here we are still in 1992 and life is fantastic; retired, living on the beach where shrimp and asparagus are cheap and beer is even cheaper. Nowhere to go, nowhere to be, no nada. Now enters Mr. Ron Peare (RIP) who had no publishing knowledge whatsoever yet decided to purchase the (original) Rocky Point Times from Alberto Aldrete. Yes, there was a Rocky Point Times before there was a Rocky Point Times Newspaper. Ron knew nothing about the print business, and had no idea what to do with the publication, nor did he realize what a job it is to get all the moving parts to work together. Anyhoo, once Ron Peare learned that my folks had spent many years publishing yellow page directories he asked them if they’d like to partner on the paper and get it up and running again. They were very much interested in trying their hand at the newspaper business but had no interest in a partner, so an agreement was made and Tom and Sandy O’Hare became the new owners of the virtually non-existent Rocky Point Times Newspaper. At this time there were no tourist papers in Rocky Point. My folks are the kind of people who say “YES” and figure out the details later and that’s exactly what they did with this new venture. Little did they realize just how different running (and laying out) a newspaper would be compared to yellow pages. At one point, as they did with all of their business ventures, they looked at each other, knee deep in copy, and said, “What the hell have we done”! They figured it out and in 1993 the Rocky Point Times published their first edition…and so did 2 other newspapers: the Sun; and The Pinacate Gazette. Three tourist papers appeared pretty much out of nowhere within days of each other. It was such a hot topic that New Times of Phoenix called my Mom for an interview about a story they were writing called, “Rocky Point Newspaper War”.

And that’s how the Rocky Point Times Newspaper came to be. We all have some great stories about those early days. One of my favorites was finding a mistake in the copy which meant we would have to typeset it again, process the film and then strip it into place. No, not my Mother. In the interest of saving time she whipped out her trusty little Sharpie or cut knife and changed an N into an M or an A into a E. When the newspaper is printed you’d have all of these nice typed paragraphs and then this one handwritten letter or word. Thank goodness desktop publishing came to be. And don’t think she still didn’t try to change the galley copy!

A few things to mention this month are whales, whales, whales! They are out and you should be out there too. How can you pass up an opportunity to be so close to such beautifully gigantic creatures? Street paving is still on the move from Benito Juarez to Constitution (to the jail) and property/homeowners you need to renew your car plates, and pay your taxes no later than March!