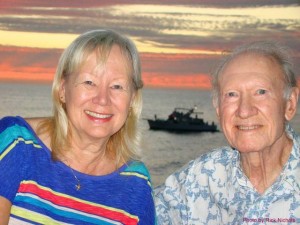 Since the age of five, Karen Aldridge has lived near beaches; around San Francisco and Anaheim, visiting other beach destinations like San Diego, Tijuana, Ensenada and Estero Beach with her family, and later as an adult with Chuck, her husband of more than 30 years.

From their very first date in April of 1980 this friendly, easy going couple have been in love and constant companions. From your initial conversation with either of them, you know they’ve never met a stranger. Chuck, an Electrical Engineering graduate of the University of Texas (Austin) with a cool, calm persona and Karen, a hyper right-brain creative who’s been into photography since her first Girl Scout Brownie camera and exudes a natural talent for sifting humor (á la Erma Bombeck) from every grain of life, no matter how malaisical or macabre. And she’s seen her share of life’s downside as a Registered Nurse with years in surgery, oncology, chemotherapy and hospice environments.

When Karen and Chuck discovered the beaches of Puerto Peñasco in 1995 after years of visiting Mexican beaches all the way to Cabo, it was another kind of love at first sight. They lived in Cottonwood, Arizona at the time and started coming down to this little slice of paradise by the sea more and more often. Finally, they uprooted from decades in Cottonwood and made the permanent transition to life in Puerto Peñasco. Their decision was undoubtedly influenced by their frequent exposure to friendly people, the mesmerizing sea, soft beaches and sunsets so beautiful as to challenge one’s logical image of how astonishing heaven’s colors can be.

As most beach lovers, Karen has always been infatuated with the tides, aware of how they affect everything from the shape of the beach to the types of plant life, marine life, even the type of shell collecting, and all the other interesting beach activities that revolve around the tide’s ebb and flow.

In 2008, Karen succumbed to her ardent desire to combine her photographic talents into a calendar worthy of a take home keepsake by the many curious visitors to this friendly sea side village. Just to make sure she got it right, Karen distributed 80 of her new calendars as samples, with Chuck’s blessings (his calm demeanor obviously laced with wisdom).

Her first creation was well accepted by locals and visitors alike, selling out nearly every year for the last six years. Front Cover 2015 Last year Karen succumbed to another intuition springing from that infatuation she’s had for tides and added daily tide patterns to her calendars. Now, along with beautiful high definition photos of everything special about Puerto Peñasco, the 2015 Calendar contains the tide levels for every day of the year. You can pick one up for $12.99 at any one of half dozen locations in Rocky Point, including:

The Rocky Point Times office off of 13th Street

Donna Peckenpaugh’s Segunda This &That on the main road out of the Malecón area.

Luis Altamirano’s Puerto Viejo Tostadores De Café in the Malecón across from the little white church with two steeples.

And, to order from the U.S. you can go to Karen’s web site at rockypointcalendar.com and click on “Order” for easy instructions.

There is much to be learned from the tide charts, especially the tides in our Sea of Cortez because ours is one of the five most highly fluctuating tide patterns on the planet. We get two high and low tides each day, known as a semi-diurnal tide. All tides are affected by the combined gravitational forces of the Moon, Sun, and rotation of the earth. By learning the tide patterns in relation to the beach you are visiting, like the golden beaches of Puerto Peñasco, you can determine the types of shells you are most likely to find as well as many other marine life discoveries in the small tide “pools” left by the receding sea. To learn more about tides and why beach lovers like Karen and Chuck wouldn’t be caught without a tide calendar, you can visit http://en.wikipedia.org/wiki/Tide, which does a good job of simplifying what can be complicated about all things tidal. Then, order or pick up one of Karen and Chuck’s Tide Calendars of your very own before they sell out again this year.

This article is brought to you by the Sonoran Resorts Sales Group,www.sonoranresorts.mx , Jim Ringquist, Director of Sales and Marketing.