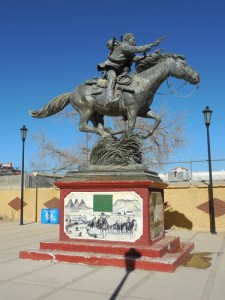 While the exploits of Pancho Villa are probably not an everyday topic of conversation in the Sea of Cortez community of Puerto Peñasco, his legendary contributions to the Mexican Revolution of the early 1900’s substantially impacted various Sonoran locations, as well as numerous places in the neighboring state of Chihuahua.

Likewise, I imagine most Eastern Arizona and Gila Valley residents have never given much consideration to Francisco “Pancho” Villa’s armed raid on the small border community of Columbus, New Mexico, about 30 miles south of Deming, in March, 1916; the first attack on U.S. soil by a foreign combatant since the War of 1812.

Yet, Villa’s brief incursion into the United States, and his revolutionary activity in northern Mexico, resulted in many Mormon settlers fleeing Mexico to the safer confines of southern Arizona, including the Safford, Thatcher and Duncan areas; farming communities situated along the banks of the Gila River Valley.

Presently, several families of Gila Valley Latter-day Saints – aka Mormons – are descendants of refugees from the Mormon colonies, as well as having relatives still residing in northwestern Chihuahua, Mexico. Originally, Mormons settled in Mexico to escape the ban on polygamist marriages – one of several decrees required by the federal government to permit statehood of Utah.

Interestingly, most of the American West, including Utah, was originally part of Mexico, but ceded to the United States by the Treaty of Guadalupe Hidalgo, ending the U.S. / Mexican War in 1848. After nearly 50 years of trying to become a state, Utah was finally granted statehood on Jan 4, 1896, but only after it agreed to prohibit plural marriages.

With the exception of a few fundamentalist fractions of the church, polygamy has not been lawfully practiced by the LDS in over a hundred years.

Acknowledged as the General of the North Division during the revolution, Villa was born Jose Doroteo Arango Arambula, June 5, 1878, in the rural village of San Juan del Rio, Durango.  When only 16, he shot a man for allegedly molesting his younger sister, and then fled to the safety of the mountains.

The following several years he labored as a miner, cattle rustler, bank robber and all-around bandit, robbing from the rich and giving to the poor.  To avoid detection by Mexican authorities, Doroteo Arango changed his name to Francisco or Pancho Villa. Endowed with a charismatic personality and instinctive skills as a military leader, his natural born attributes would later propel him into being a major player in the Mexican Revolution of 1910-20.

Villa also possessed other notable talents.  Pictures typically show him to be a somewhat chunky individual, relaxed in motivation and sluggish in personal appearance. Actually, he was a competent horseman, avid swimmer and often jogged to stay in shape. He could dance all night with the ladies at local fiestas, probably because he didn’t become inebriated from drinking liquor. Reportedly, he was officially married 26 times which, undoubtedly, helped to maintain his physical fitness.

The Mexican Revolution of the early 1900’s was, in many aspects, no different than any other war, with armed forces requiring a steady replenishment of supplies if they were to continue to maintain their mission. They usually obtain them through their own sources or from whatever means available.  Villa’s troops faced a similar situation.

Following several defeats during the winter of 1915-16, Villa’s army was in urgent need of ammunition, food, clothing and other supplements.  Consequently he began raiding mining camps, railroads and ranches in northern Mexico. However, these targets failed to provided sufficient quantities of the needed provisions.

As a result of his depleting supplies, U.S./Mexico border towns attracted Villa’s attention. Prior to the Columbus raid, Villa and his troops attacked Agua Prieta, Sonora, across the international boundary from Douglas, Arizona, on Nov. 1, 1915. The night raid was repelled, at least in part, because of the use of powerful search lights, powered by American supplied electric generators. Once an ally of the United States, Villa considered the use of the lights an intentional intrusion into his affairs and began formulating plans to strike back at the Americans.

Since Mexican resources were becoming less reliable, Villa decided to look north of the border. Under the cover of darkness on March 9, 1916, he advanced with several hundred troops towards Columbus and the U.S. Army detachment at Camp Furlong.  Scouting reports indicated only about 50 soldiers were garrisoned at the post, leading Villa to believe there would be light resistance. In actuality, about 350-400 soldiers of the 13th Cavalry were stationed at the camp. A tactical error that would soon cause serious injury to Villa’s forces.

A shallow mesquite lined arroyo a short distance southwest of Columbus provided concealment for the raiders until Villa gave the order to attack in the early morning hours.

As Villa’s forces began to pillage Columbus, the sound of gun fire and smoke from burning buildings alerted the camp’s forces. Within a few minutes, army personnel manned machine guns and rifles and began firing in the direction of the commotion. Other U.S. troops, shooting from the eastern side of the community, caught Villa’s soldiers in a cross-fire.

Within an hour and a half, ten civilians, eight soldiers and 70–75 revolutionaries had been killed. As the sun rose and realizing obvious defeat, Villa retreated back into Mexico.  The hope of resupplying his forces with fresh American munitions, horses and food was only partially successful.

Villa’s failed raid on Columbus was not the end of his headaches.  President Woodrow Wilson – upon learning of the brazen attack on a southwestern U.S. city and army post – dispatched General John “Black Jack” Pershing and several thousand soldiers to pursue Villa.

In those days organizing and deploying such a large contingent of troops took several weeks, giving Villa ample time to disappear into the mountainous back-country of Mexico.

Paradoxically, Gen. Pershing’s “Punitive Expedition” was the last time a horse mounted cavalry military operation was ordered into action, but also the first time automobiles, trucks and airplanes were employed.  Pershing’s experimentation with the new machines would later prove to be a testing lab for their future use in World War I.

After unsuccessfully chasing Villa for almost a year, Pershing was ordered back to the United States in February, 1917. America’s imminent entry into World War I took precedence over a rag-tag group of border bandits. While the Columbus “Villista” raiders were partially dispersed by Pershing’s forces, Pancho Villa wasn’t apprehended. Villa continued to lead armed assaults until the conclusion of the revolution.

In 1920, Villa and Mexico President Adolfo de la Huerto negotiated a peace allowing Villa to receive a general’s salary and retire to a ranch in El Canutillo in the state of Durango. It was a short-lived retirement. Three years later Villa was cut down by assassin’s bullets in Parral, Chihuahua on July 20, 1923.

He was 45 years old – The killers were never arrested.

Historical research has speculated the murderers were government agents or hired executioners.  Either way, they were not pursued with much enthusiasm, leading many to believe Villa’s death was intentionally premeditated and sanctioned by former political and military adversaries.

Depending upon one’s point of view, Villa was either a national hero or war criminal. Like his controversial life, his bodily remains are believed to be interred in the Parral, Chihuahua city cemetery, or the Revolutionary Monument in Mexico City. Adding to the uncertainty of his burial whereabouts, macabre rumors have suggested Villa’s mummified head is presently in the possession of the Order of the Skull and Bones, a secret Yale University undergraduate society founded in 1832.

Since no one knows for certain, Villa’s tombstones can be found in both Mexico locations. Whether or not his head is still attached or severed and stuffed in a box in New Haven, Connecticut remains a mystery. After all, it’s a secret.

However, I suspect modern DNA forensic testing might help to resolve the confusion. That is, if a corpse really exists to examine.

The picture accompanying this article is of a large monument of Pancho Villa leading a military charge on horseback, proudly displayed in the border town of Palomas, Chihuahua, Mexico, a couple of miles south of Columbus.