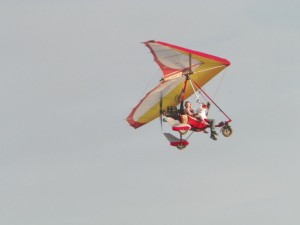 When visiting Rocky Point, I’m continually seeking new and exciting things to do, as long as it doesn’t require too much physical exertion or undue mental strain. Sometimes I’ll watch trinket vendors fervently haggling with Playa Bonita RV Park customers; kids burying each other in the sand at low tide, hoping mommy and daddy won’t notice little brother Billy is missing until high tide; or a rapidly moving banana boat, twisting, bucking and nearly drowning its thrill-seeking riders in the salty environs of the Sea of Cortez. But most of the time I’m perfectly content to remain semi-comatose in a beach lounger, veneered with multiple coats of SPF-30, casually and quietly minding my own business.

If this isn’t paradise, it must only be a fish taco away. That is, until a low flying ultralight aircraft penetrates my airspace. Then, images of paradisiacal tranquility quickly evaporate into the troposphere. What’s a guy gotta do to get a little peace and quiet?

Two choices: Don’t camp in the flight path of approaching flying machines or calmly accept the fact people are enjoying their recreational retreat and are merely finding exhilarating ways to juice the adrenalin levels.

Which is fine. Actually, observing these folks weaving and dipping across a cloudless sky, propelled by a tiny motor strapped to their back, is sort of stimulating – and enviable. After all, how many can say they’ve slipped the surly bonds of Earth and gone where only silvery winged gulls and pelicans dare?

All of this got me to thinking – or what I call thinking – since an ultralight seems to be a miniaturized version of an airplane, then there has to be certain aeronautical principles of design and construction that must be adhered to in order for the contraption to fly. I don’t believe it’s as easy as mounting a reciprocating engine to the rear of a tubular frame, stretch a few yards of fabric over a small wing, attach two or three wheelbarrow wheels and taxi down a dirt road into the wild blue yonder.

Basically, ultralights come in various shapes and sizes, including unpowered hang gliders, powered parachutes, front or rear engine, single and two seat cruisers to practically any combination thereof. Flying “low and slow,” ultralights are relatively easy to operate and economical to fly. New machines cost, on average, between $8,000 and $15,000. Used ultralights can be purchased for as little as $4,500.

To gain additional information on regulatory requirements of ultralights, or learn the whys and wherefores of their place in government oversight, the United States Code of Federal Regulations, Title 14, Part 103, or simply 14 CFR Part 103, provides a list of items related to the subject. Come on, you instinctively knew there had to be some kind of bureaucratically concocted directives relating to this endeavor. Having fun is great but it has to be safe, eco-friendly and in compliance with reams of nonsensical decrees. Otherwise, some loopy citizen might try to land one on the White House lawn. Which, in fact, someone already has. So much for the rule book.

Anyway, according to federal regs, an ultralight is a vehicle that:

– Has only one seat.

– Is used only for recreational or sport flying.

– Does not have a U.S. or foreign airworthiness certificate.

– If unpowered, weighs less that 155 pounds.

– Operators of ultralight vehicles are not required to meet any aeronautical knowledge, age, or experience requirements or to have airman or medical certificates.

– Are not required to be registered or to have registration markings.

– Cannot be flown except between the hours of sunrise and sunset.