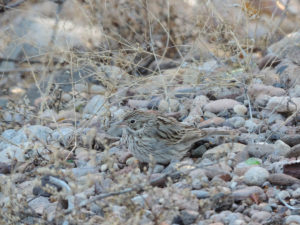 I don’t plan the pictures. That is to say, I don’t wake-up in the morning and ponder “Think I’ll go out and snap a few images of a Cooper’s Hawk” or some other feathery animal. Nope, it just sort of happens.

In this particular case, I was actually taking photos of a late afternoon sunset. Which, when you think about, is the only time of day a sunset takes place. While patiently awaiting for the sun to descend behind the mountain, I happened to notice a little bird busily scurrying about in some weeds and brush just a few yards from where I was standing.

Not being a bird expert, I just assumed the tiny guy was some kind of desert wren, foraging in the thickets for an evening meal. He appeared unconcerned with my presence and after a while actually seemed to pose for the camera.

Returning home, I logged-on to the computer, googled “small southern Arizona desert birds,” and soon a series of articles and pictures appeared. Believing the bird was a wren of some kind, I studied a few of the reports and photographs of the Cactus Wren, Rock Wren and a couple of others but the descriptions and photos didn’t quite fit the pictures of the little bird I had encountered.

Undeterred, I then researched “finches” and discovered there were more varieties than I ever imagined. Though, admittedly, I really hadn’t given much thought to wrens and finches before. What I learned was completely new to me.

Narrowing the category to what was listed as a common “House Finch,” other finch relatives appeared; Purple Finch and Cassin’s Finch.

From the descriptions and pictures of the three types of birds, it looked like the photos I took of the diminutive bird in the weeds was a female Cassin’s Finch. But there was a problem with this – Cassin’s Finches are found primarily in mountainous areas from Northern Arizona to Canada. Not in the semi-arid deserts of the Southwest.

A possible explanation for her presence may be the fact 10,700′ Mount Graham is close by. This “Sky Island” is the home of the Mount Graham International Observatory and is heavily forested with all manner of trees and shrubbery. Supposedly ideal conditions for a Cassin’s Finch.

One of the characteristics of the House Finch is they forage on the ground, eating grains, seeds, berries, nettle, weed seeds and dandelion. They will also consume small insects and aphids. Backyard bird feeders are one of their favorite dining locations.

Producing two or more broods per year with 2 to 6 eggs per brood, the female will lay clutches of eggs from February through August. Interestingly, the male is responsible for feeding the female during incubation and also the young fledglings.

In general, House Finches are native to western North America. Originally, a resident of Mexico, they were sold illegally in New York City as “Hollywood Finches.” To avoid federal prosecution under the Migratory Bird Treaty Act of 1918, many owners and vendors released their birds into urban and rural areas.

A hearty species, it is estimated there are approximately 267 million to 1.7 billion House Finches in the United States and Mexico.