In 2012, Russ and I attended the Blue and Arts Festival held in San Felipe, just across the Sea of Cortez. It was so much fun that we added it to our Peñasco Recreation List of Tours for 2013. We gathered a group of fun-loving travelers from Peñasco, and we headed off to the Blues Festival in March of 2013. (*You can read about the trip on page 18 of the May, 2013 issue of RPT. Find it at: http://issuu.com/rockypoint/docs/may_2013_rptimes)

As Sandy suggested in her article, there were some things left unsaid. For instance, why exactly did this group became known as the “Peñasco Payasos“? It started innocently enough when we were stopped at one of the military checkpoints and the soldier asked who was onboard. Russ replied in Spanish that we were just a “bunch of clowns from Peñasco”. Apparently, this was entertaining at some level to the soldier! And, he let us go without an inspection. This was really nice since we were pulling a small trailer behind our van with not only nine people’s luggage, but also tables, shades and merchandise for two art booths that Tony Ballesteros and I would be setting up at the Festival. The guys estimated they had used at least 80 bungee cords to secure the load, unpacking that would have made for its own adventure! 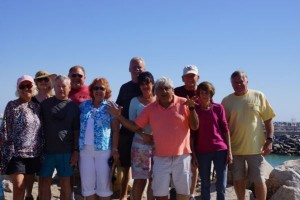 We arrived in time for the Friday night preview event. One of the featured bands was the Bayou Brothers from San Diego playing their crazy, happy, dancing zydeco music. They invited members of the audience to come on-stage and play an instrument and dance. Well, of course I wanted one of our Peñasco “representatives” from our group to dance. To be sure, I begged and begged! However, nobody was willing to go on-stage. For whatever reason, I felt someone HAD to do it. So, I tossed my shoes aside and went onstage – put on the washboard, grabbed a spoon and played and danced. (NO. This is not like me. NO. I do not dance well. NO. I cannot play an instrument. But, I did it anyhow.) It was a fun evening and the music was a blast.

The next day was the all-day music event along with the artist’s exhibits. As the day came to a close, I suggested to Russ that he take the group back to the hotel. Then return for Tony and I, thus giving us time to pack up. But our fun-loving payasos (or, clowns) would not have it! They all pitched in and before we knew it we were packed up and ready to go. Since then, this traveling group of “Peñasco Payasos” joined us in the RussBus for several other trips. Russ and I always enjoy their company! But we have a special place in our memories for that first trip!

We have invited the Bayou Brothers to be a part of our Pirate and Mermaid Extravaganza on April 18th. We are positive the Peñasco Payasos will be there along with lots of our fun-loving neighbors! Please don’t dress up as a clown…Instead, put together a Pirate or Mermaid costume and join the fun at the park. All day long on April 18th it will be a New Orleans party with Music, Hurricanes & Mermaid Margaritas along with Cajun specialties from Satisfied Frog. The menu will include Chicken Andouille Sausage Gumbo or Seafood Gumbo along with a Cajun Boil of potatoes, sausage, cob corn and shrimp with baguettes. Yum!

And, don’t forget to buy your tickets for the concert featuring the Bayou Brothers. We are going to have so much fun! www.mermaidsmarket.com