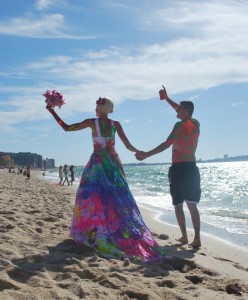 It was at the magical Roger Clyne and the Peacemakers Concert in 2007 when Kenny first met Kasia and they had their first kiss.

Kasia had come down to Puerto Peñasco from Chicago for the first time on the weekend of the biggest and best concert of the year. Kenny was like a party legend in Rocky Point hosting the coolest beach parties known as “Rocky Point Beach Bash”. He brought beachy music, girls in bikinis, lots of beer and many fun people together for some of the greatest beach parties ever! There is not a place in our town were Kenny can show up without someone knowing him and being happy to see him again. It is so easy for him to have friends and he loves Mexico and the little beach town he called home for seven and a half years.

Upon meeting that summer, Kenny and Kasia were instantly stricken by Love and Kenny surprised her for her 25th Birthday by going to Chicago where Kasia was living at the time. From there they went on a month long trip to Australia, their adventurous spiritsand creative souls found to complement each other. 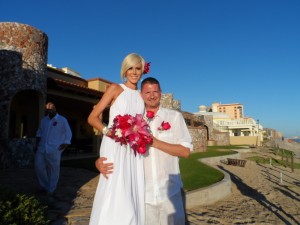 Kasia, very tall and elegant has a very special eastern European beauty, she turns heads anywhere she goes with her effortless elegance and flowing movements but what Kenny loved most was her openness and sweetness. She also has her own jewelry line called “Misguided Angel Jewelry” where she expresses her creativity and interest in organic shapes and nature while at the same time being bold and modern.

Naturally they chose the beach in Rocky Point for their fabulous wedding which was not just a day but a full 4 days full of fun, events, good friends and good memories.

In Kenny’s own words:

“Rocky Point is where my heart has always been, the ocean brings a sense of calm to an otherwise hectic world.  It is where I met Kasia, where we had our first kiss, and where we found a love that will carry us through our whole lives. To celebrate our love on this special day in this location with all of you is going to be perfect. I invite you to soak up the culture and essence of Rocky Point as much as possible”.

It all started with the best sunset cruise hosted by “Eco Fun”. Friday at 6:00 PM was the time when the party cruise took off on a perfect evening; just when the sunset was at its prime beauty. The cruise also became the surprise engagement of Kasia’s brother, Adam, who proposed to his girlfriend Natalee, with a super romantic. He said, “Would you marry me”, at the bow of the boat. Natalee took the ring on her hand and gave Adam a big hug and long kiss that meant a beautiful “I Do” It was so sweet some people had tears in their eyes.

Maru, Eco Fun owner, made sure everyone had enough to drink and the Polish homemade Vodka made its first appearance that Friday night at the boat. The music, the friends and family and the weather all were perfect.

Coming back with a sky full of shining stars while cruising the Sea of Cortez was just a great experience that we all shared that night.

Saturday afternoon in Sandy Beach the beautiful couple shared their vows, Kasia was stunning in her wedding dress and Kenny was both stylish and beach appropriate with his white shirt and pants. The ceremony was sweet and led to the reception, planned by Cathy Poturalski at the beautiful grounds of Bella Sirena. An elegant selection of cheeses and dried fruits plus a well stocked bar and of course a lot of that Polish vodka greeted the guests. After a well presented Mexican dinner the entertainment kept everyone busy. A DJ played both oldies and the latest hits keeping everyone dancing. Kasia had a selection of glowsticks to juggle or just wear and shine, she was so kind to even have sandals labeled “your dancing shoes”. I joined the ladies ditching their heels for the more comfortable and beachy sandals. Other wedding favors were shot glasses and cool can koozies that read “A wedding without a Buzz is a wedding that never was”, sparklers also entertained the guests and the first dance for the couple happened while the guests made a big circle holding sparklers to light up the newlyweds dance. To button up the beautiful evening flying Chinese lanterns were lit at the beach and we watched them soar and fly into the sky with all the good wishes for Kasia and Kenny and their new life together.

Sunday brought relaxation by the pool and playing on the beach, a visit to the old port, with the classic coconut ice-cream for treats, and shopping at the fish market and eating Mexican food.

Monday Kenny has something special planned, as they called anyone interested to “Trash the Dress”. Everyone who showed up at the beach had tempera paints and got to splash, paint or smear Kasias’s beautiful white dress until it was a brightly colored piece of community artwork!

She was not the only one with paint on her, actually everyone had paint one place or another and we all ended up in the ocean playing with the waves for some colorful pictures of the group.

Thank you Kenny and Kasia for a beautiful weekend and sharing your happiness with us!