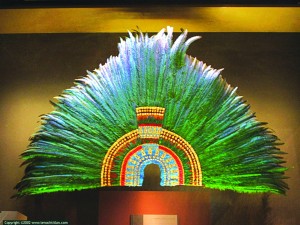 Once the Conquistador Hernan Cortez and his army were expelled from Tenochtitlan, the site of modern day Mexico City, on June 30, 1520, the Mexica, a.k.a. the Aztec, believed that they were rid of the white-skinned invaders and would never see them again. They tried to resume their lives and religion; restoring the temples that the Spanish Conquistadors destroyed and performing their sacred rituals. They removed the dead bodies of both their own people and of the army of Cortez. Among the corpses was at least one Spanish soldier who was infected with Small Pox, a dreadful, painful, deforming and fatal disease.  The sickness quickly spread to the Mexica. Unlike the Europeans they had no resistant immunity. The majority of men, woman and children contracted the disease, suffered and died horrible deaths; either from the disease itself or from starvation, since there was no one to, or who could, help them. The epidemic subsided in about 70 days. The combination of the deaths from the disease and the battles with Cortez’s army left the inhabitants of Tenochtitlan incredibly weakened.

Meanwhile, more Spanish galleons were arriving from areas around the coasts of Mexico. These Conquistadors were fueled with greed in their hearts, seeking the gold which was supposed to abound in New Spain. There was no stopping these lustful invaders. Cortez was making plans to return to Tenochtitlan. He ordered the building of small shallow-hulled bottomed vessels, built from the ships that were anchored off shore. These crafts were intended to be manufactured in sections making it possible to be transported over land and assembled outside of the city of Tenochtitlan, which was located in the middle of Lake Texcoco.

Not waiting until these ships were ready, Cortez headed to Tenochtitlan, in December of 1520, surrounded the city with his men, and one by one capturing the towns that were located around the outskirts of the lake. There were attempts to enter Tenochtitlan on foot and horseback, through the causeways, but his army was driven back by the Mexica.  However, the inhabitants were trapped inside the city; cut off from food and supplies. The Mexica did venture out by canoe, at night, to restock the essentials, as much as they possibly could.

Finally, in May of 1521, the convoy with the segments of the ships arrived loaded on the backs of thousands of Amerindian allies, without whose help conquering Mexico would not have been possible. Cortez had the ships assembled, mounting them with cannons; his intention was of full-out war upon one of the most beautiful cities in the world.

When the ships were completed, he set them in the lake that surrounded the City of Tenochtitlan and began firing the cannons focusing on one side of the city to the next. Numerous Mexica men and women, carrying children, fled the city in canoes. Eventually, Tenochtitlan was destroyed, killing many of the inhabitants. Cortez cried as he watched the assaults. He truly wanted a peaceful alliance, without destroying magnificent cities and killing the Amerindians. But, because of the poor judgment of his Lieutenant, Pedro de Alvarado, who attacked and killed worshiping Mexica on May 20, 1520, this would now be impossible. But, he reasoned, if there was no other way to conquer Mexico, then he would do whatever was necessary. He rationalized that since the Aztec Empire, under Montezuma (Moctezuma) II, had surrendered to the rule of the King of Spain, the Mexica were being treasonous and thereby justifying their subjugation.

No matter what European country invaded, the lives and culture of the Amerindians would fall victim to the destruction of their world.