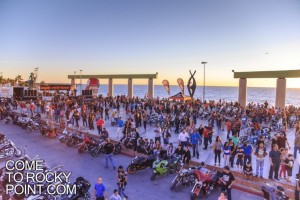 With the arrival of over 6000 bikers to the shores of Puerto Peñasco, the 2014 Rocky Point Rally™ surpassed expectations, bringing with it an important economic boost to various business sectors.

Oscar Palacio Soto, organizer of the traditional annual event, expressed while exact figures of bikes returning North through the Sonoyta-Lukeville border crossing have yet to be reported, the number of bikes increased significantly over last year, which saw just over 5000 bikes in town.

He indicated that on Saturday alone, November 8th, there were easily 2500 bikes along the Malecón area with thousands more left in area hotel and condominium parking lots – with lots of bikers opting to taxi it down to the main events this year.

Biker fiestas, the roar of engines, and leather jackets could be seen, heard, and felt throughout the city this year with events expanding across Plaza de Gobernadores on the Malecón, along Calle 13, as well as out to various sponsor restaurants and bars. This included Thursday night’s Kick-Off party which drew an even larger number of bikers than expected. In addition, Saturday’s mid-day parade went off without a hitch and with a good showing of rally goers.

This 14th edition of the Rocky Point Rally™ presented a larger variety of events, including both rock and country concerts, a Miss Rocky Point Rally contest, and special prizes at Saturday’s bike show, among others.

Another twist on this year’s Rally were the number of motorcycle groups and friends who arrived well before the event, or chose to stay longer. In addition, a number of “non-biker” tourists came to town to take in the rally without bikes.

Plans are already in the works for next year’s 15th Anniversary of the Rocky Point Rally™, with dates set for Nov. 11 – 15, 2015. Ongoing information at: www.rockypointrally.com

Interested in becoming a sponsor for 2015? Please drop a note to:rockypointrally.com@gmail.com