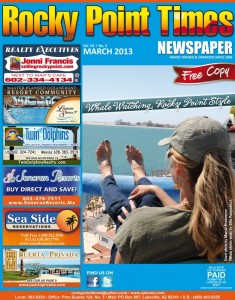 Man, oh man, is this year flying by fast. The older you get, it seems the faster they go by. Last month I received a call from a woman, I think her name was Sharon, saying that she has been a long time resident and traveled extensively throughout Mexico and she understands the things that are necessary to do so, like visa’s, auto insurance, passports etc. However, after a trip to the U.S. recently, when returning to Rocky Point with her dog, she got a red light at the border. The inspector asked for her dog license and health certificate, which she had. He then told her that he had to take a photograph of her dog. She did not understand why that was necessary, and was not given an explanation, so she called our office to see if we had heard of anything like this before. The last time I came across the border, I got a green light, but an inspector was standing in the road and pulled me over to the right. I had a twenty lb. bag of cat food and was told that this was a No-No and that seven kilos was the maximum allowed. He let me pass with a stern warning. After our cat food debate, I asked him why they are taking photographs of peoples dogs. His answer basically was that they were working on a system that would match the animal to the vehicle VIN number and, in the future, issue some sort of I.D. tag so that the inspections would be expedited. For many reasons I don’t think this is viable, but anyone who lives in Mexico knows that the government loves paperwork. What if I bring another pet? What happens when I get a new pet? What if I am driving a different vehicle? Well, I guess we will wait and see what happens with that. Speaking of the border, we were told by a local realtor that when he went to pay at the bank for voluntary declaration, they would not accept U.S. dollars. As far as we know they accept dollars, but your change will be in pesos. We can only guess that there was some misunderstanding which, of course, can happen again and we suggest that you have pesos, “just in case”.

We have had several inquires asking why the Cet-Mar Aquarium is closed. We are still being told that it is closed for extensive remodeling, and that will be open to the public as soon as they are finished. They assured us that the animals were being cared for.

I mentioned earlier how time flies. It seems like just yesterday that there were about thirty vehicles all parked at the Ranchito waiting to begin the 33rd, semiannual “El Golfo Run”, which we do in May and October. And now May is right around the corner. Sandy and I were not able to go on the October run and after everyone got back to Rocky Point, we heard there was a little confusion about hotel rooms. One of the ‘hotels’ where we normally stay, there was an ownership dispute, and the place was not open. Well, this month Sandy and I will be checking out all the hotels in El Golfo for their availability, security, parking and pet accommodations. We will have the information by the end of March. The May run is May 3rd, 4th, and 5th. The ‘survivor’s party’, this time, will be held at the Lighthouse Restaurant on top of the hill in Rocky Point, where we will be served a free Margarita, chips and salsa, while we check out the menu. For those of you that have not heard about our “El Golfo Run”, it is about an 85 mile trip from Rocky Point north to the small town of El Golfo de Santa Clara. We try to stay off road as much as possible but with the new land developers it’s becoming a little more difficult. But somehow our scouts Dave and Robert find a way to make it interesting. A four wheel drive, dune buggy or off road vehicle is necessary. Everyone is welcome and if you like meeting new people, is not in a hurry, can tolerate many pit stops and want to see some spectacular scenery like the salt flats and twenty plus miles of sandy beach, mark your calendars. Call Alicia at our office (011-52-638) 383-6325 or (480) 463-6255 or email rockypointtimes@yahoo.com and make a reservation. Sandy makes sure that everyone has a room when we get there.

Mark Mulligan told us recently that he is trying to make time in his busy schedule for a trip to Rocky Point. We have been fans for many years now, and look forward to another concert here in our town. In the meantime, check out his new release Back to Laid Back. Visit Mulligans Island at www.markmulligan.net. We will report to you when we get a date.
We want to thank you all for following our Facebook Page (Rocky Point Times Newspaper). We have almost 3,000 ‘Likes’, just since April 2011! If you haven’t been to our Page yet, check it out and tell us what you think.
There is a lot going on this month, beginning with Spring Break March 9-23. Third Annual Women’s Cabalgata March 9, call Grethel 380-6641. InSANDity beach obstacle course race @ Princesa on Sandy Beach on March 14-19, Dirty Beach Mud Run at Sandy Beach March 16, and OTL softball this month, and Easter week this town will be full to the brim for Semana Santa! Welcome all!! There will be a service for a Memorial for Betty Munro Moore on Saturday, March 2nd at the Radio Shack area.  We hope that everyone who knew Betty and is in Cholla, will try to attend.  It’ll start at 10:30. This date would have been her birthday.