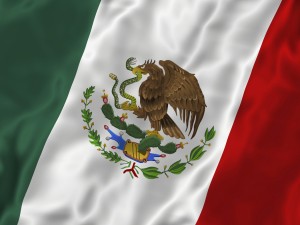 September is the ‘Month of the Country’ in Mexico, you will notice many little red white and green decorations around town, Mexican flags in the cars and houses and other patriotic decorations and specialty items for sale throughout the town…

In this month we celebrate the beginning and end of the war for the independence from Spanish rule, which happened between 1810 and 1821 respectively.

At 5AM on the 16th of September 1810, Father Hidalgo together with several conspirators –Ignacio Allende, Doña Josefa Ortiz de Domínguez- rang the bell of the church in Dolores Hidalgo (a town in the state of Guanajuato) and with the cry of independence: Viva Mexico! Viva la Virgen de Guadalupe! Viva Fernando VII! Muera el mal Gobierno! (Live México! Live the virgin of Guadalupe! Live Fernado VII! Death to the bad government!) enticed the people of Mexico to launch against Spanish oppression and fight for freedom.

We also remember the “Child Heroes” that gave their lives for the country on September 13th1847, this happened during the war between Mexico and the US. When the US army arrived in Mexico City there was a battle that ended with the Castle of Chapultepec being taken. This same castle had been the residence of the last emperor of Mexico, Maximilian of Hapsburg and at this time it was being used as a Military Academy. The cadets were suddenly in battle, the information that we have, which some historians have questioned, is that by the end of the battle the Mexican forces were easily taken by the superior number and weaponry of the US army, left behind were 6 young men, basically children defending the castle. They were Agustín Melgar, Vicente Suárez, Francisco Montes de Oca, Juan de la Barrera, Juan Escutia and Francisco Márquez, their ages between 13 and 21 years old. The Children Heroes as they are known today, did not surrender, they fought a whole army until they lost their lives. To keep the enemy from taking the Mexican flag Juan Escutia, 17 years old, went on the tower of the Castle, wrapped himself with the flag and jumped from the tower to his death.

Mexico City was taken September 14, 1847 and as a result of this war and the treaty of Guadalupe Hidalgo, Mexico lost New Mexico, Upper California, Texas and part of Tamaulipas, thereby reducing Mexican territory to less than half.

There is now a monument very close to where Juan Escutia landed right next to the castle of Chapultepec and he is honored and remembered for his courage and patriotic heroism. US presidents have taken flowers to the monument, manifesting in this way their respect for this patriotism. In May of 1997 President Clinton did just that, paying tribute to the courage of the Mexican Child Heroes.

This is also the month of the Mexican Fiesta! On September 16th nobody works in Mexico, banks are closed and even the Mexican stock market closes. There’s not even a newspaper printed on that day! Most towns have celebrations honoring the Mexican flag and there are parades where kids from all the schools go dressed in typical clothes, some representing what happened in 1810.

On September 15th at 11PM, towns all over Mexico, and Mexicans all over the world get together for the “Grito” or independence cry. Some families stay home to watch TV and listen to the President of Mexico make his public address. Before the “Grito”, he rings the same bell that was used by father Hidalgo in 1810 from a balcony in the national palace and the event is broadcast from the “Zocalo” of Mexico City (a giant plaza that some say is the biggest in the world). Thousands of people gather to join in the independence cry, party and watch a fantastic firework display.

In every town the government representative, which in Rocky Point is the Mayor, goes out to do the “Grito” and at the same time waves the Mexican flag. Then the Mexican anthem is sang, followed by a huge firework display and the party starts! There’s vendors with typical Mexican food, Mexican candies, drinks, mariachis and bandas Some families celebrate with their own Mexican nights, decorating their houses and cars with Mexican flags: red, green and white are the colors of the month and kids represent the history of independence followed by a good Mexican dinner.

If you want to experience this huge party here in Rocky Point, be ready for a huge crowd around the municipal building, located on the corner of Blvd. Juarez and Fremont. People start arriving to eat, party and drink and get a good spot to view the fireworks. There’s lighted decorations and the whole area around the municipal building is closed to vehicular traffic so plan on leaving your car a few blocks from there and walk towards it. You can’t miss it, you will see people of all ages and there will be stands with food and Mexican flags and shiny toys for kids all over the place.

Don’t forget to buy your Mexican flag. There will be plenty to choose from right there, more and more people will gather trough the night until it’s almost hard to move around. Then at 11 pm (Please confirm time before attending the event), just follow the crowd and be prepared to yell, shout and make as much noise as possible saying “Viva” at the top of your lungs after every sentence from the Municipal President! After that follows a firework display, it’s amazing but be careful, and don’t get too close! Some of them spin and whistle, they are true Mexican crafts, handmade and not entirely safe, Cruz Roja (Red Cross) will be right there just in case. Then most people leave this area and move on, walking towards the Malecon which is also closed to the traffic. The party goes on there with music for everyone to enjoy. This is an authentic Mexican tradition which takes place every year and is part of the culture in this country. Anyone can join in and celebrate, while experiencing the flavors, sounds, scents and colors of this very unique celebration.

And don’t forget to wave when you see me somewhere close to the fireworks this year, I never miss this party.