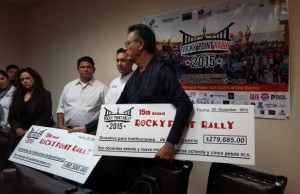 Prior to the 15th anniversary edition of the Rocky Point Rally™, held this past Nov. 11th through the 15th, longtime organizer and Rally founder Oscar Palacio Soto detailed his hopes of nearing record numbers, raising more funds for charity over last year, and all in all making this year’s Rally safe and one not easily forgotten. GOALS MET!

This past Saturday, Palacio and the rest of the Rocky Point Rally organizing committee presented Mayor Kiko Munro with two checks representing the total amount of donations for charity raised from the volunteer Rally registration and Over the Border Poker Run, along with the amount of funds raised for charity from various activities done over the weekend. This year, registration and poker run donations totaled $279,685.00 pesos (nearly $18,000 US). This is 76,000 pesos (about $4800 US) over the amount raised in 2014, which was already 75% over that raised in 2013. Organizers are working on strategies to make sure the number of donations from registration continues to grow in coming years.

In addition, after collecting information from charity groups who continue to raise funds for their organizations throughout the entire weekend of the Rocky Point Rally (through parking fees, bike wash, plus sales on beer and tacos), Palacio presented the Mayor with a second check for the amount of $90,500 pesos (about $5800 USD), which is illustrative of the additional benefits the rally brings to these organizations. It is notable to add, for a first time, this year culinary students from the local UTPP (Puerto Peñasco Technological University) were able to raise 9000 pesos for tuition from the sale of tacos at the registration area early into the weekend.

Traditionally, the seven organizations who receive part of the charitable donations from the rally include:

This year, an eighth contribution was made specifically to the DIF’s program for scholarships and assistance for Puerto Peñasco students pursuing higher education beyond the city. Similarly, scholarship funds were donated to the DIF from the Bike Show held on the malecón during the Rally, which for a 2nd consecutive year was successfully organized and run by members of American Legion Riders.

It is always a challenge to pinpoint the exact number of “iron horses” that ride around our seaside port over what has become known as “rally days” (or rally week to some). Palacio had initially anticipated at least 7000 bikes at this year’s event, though for anyone who was down on the malecón over that weekend, not to mention at nearly every watering hole, hotel, taco stand and dive in town – this year DEFINITELY surpassed that initial mark – plus drew in over 20,000 visitors in all. Palacio’s science of detailing the number of participants stems from information reported by area hotels and condos, the general flow of tourists through area restaurants and bars, and even conversations with folk at the US/Mexico border as to their own perceptions and observations. Whatever the number this year, we are certainly near the 10K mark (in number of bikes) and everyone is already gearing up for 2016!