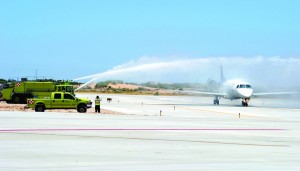 The carrier will serve this new route twice a week with Embraer 145 aircraft.

Puerto Peñasco, Sonora, June 20th, 2013. Aeromexico, Mexico’s global airline, started serving the new Hermosillo – Puerto Peñasco – Las Vegas, Nevada route, along with the support of the Commission for the Promotion of Tourism (COFETUR) of the State of Sonora, the Convention and Visitors Bureau (CVB) of Puerto Peñasco and Grupo Vidanta, SA*.

This new twice weekly flight will be operated with the following schedule:

*Times published are local to each country and are subject to changes without notice.

Aeromexico is committed to its customers, which is why it continues to strengthen its presence in Hermosillo one of its main hubs, from where the carrier serves 11 domestic and three international flights, thereby increasing connectivity to Northern Mexico.

*Grupo Vidanta, SA, operates the hotels Mayan Palace, The Grand Mayan, The Grand Luxxe, The Bliss Resorts, among others, and the Sea of Cortez Airport in Puerto Peñasco. 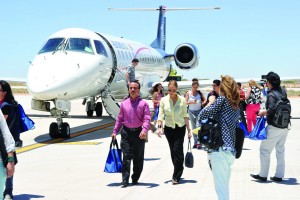 Grupo Aeromexico, S.A.B. de C.V. is a holding company whose subsidiaries are engaged in commercial aviation in Mexico and the promotion of passenger loyalty programs. Aeromexico operates more than 600 daily flights from its main hub in Terminal 2 at the Mexico City International Airport. The carrier serves more than 80 destinations on three continents, including 46 in Mexico, 18 in the United States, 11 in Latin America, three in Europe, two in Asia and one in Canada.

The Group’s fleet features Boeing 777, 767 and 737 jet airliners and the latest Embraer 145, 170, 175 and 190 models. In 2012, the airline announced the most significant investment plan in aviation history in Mexico, to purchase 100 Boeing aircraft including MAX 737 jet airliners and ten 787-9 Dreamliners. The carrier will take delivery and start to operate its first Dreamliner in October 2013.

Housing in Ajo “Where Summer Spends the Winter”