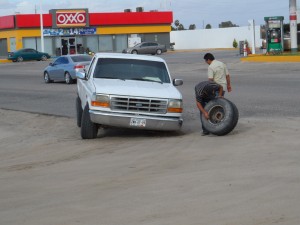 Sometimes removing a tire from a vehicle isn’t difficult — it’s putting it back on that can cause a few headaches.

After leaving Bryan’s Sports Bar on Blvd. Fremont and approaching the intersection of Blvd. Josefa Ortiz de Dominquez, I was quickly alerted to a rather unusual occurrence, even by Mexican standards — a lone vehicle tire was rolling into the center of the intersection with a distraught rescuer in pursuit.

I’ve certainly been to Mexico often enough to appreciate the wisdom of the ancient Aztec prophesy: “What falls to ground may come around.” Or, as we might say in Rocky Point, “Watch out for debris exiting vehicle, including loose wheels, tires, trunk lids, water bottles, firewood, passengers and other assorted paraphernalia.”

A pickup truck heading south on Blvd. Josefa de Dominguez was attempting to turn right onto Blvd. Fremont when the left front wheel suddenly came off, awkwardly spinning onto the roadway. In compliance with Newton’s Law of Gravity, the truck immediately plowed into the sand and came to an abrupt stop.

Just as quickly a passenger, Hector, jumped from the vehicle and ran after the wayward tire before it could slam into an oncoming car. Luckily, I steered clear of the commotion in sufficient time to avoid tangling with the obstinate object; quickly grabbed my compact Samsung point-n-shoot camera and began snapping a few pictures of the potentially dangerous but hilarious incident.

After Hector returned with the tire, several local individuals surrounded the truck, fervently discussing the seriousness of the situation, pointing to multiple mechanical issues and seeming generally concerned over what to do next. From my point of view the primary problem was evident: How to reattach the wheel when there was no jack to lift the vehicle?

Not to worry, Mexican ingenuity — and a little luck — arrived in time to resolve the dilemma.

Retrieving what I estimated to be about an eight foot long steel pipe from another truck, and following installation of a make-shift fulcrum fabricated from various wooden logs donated by a corner firewood vendor, the small team of expedient laborers began to pry the front of the vehicle high enough to replace the wandering wheel under the front fender.

At this point, everything looked good to go.

Following several moments of intense debate, another unexpected predicament presented itself. Realizing reattaching the wheel required the assistance of a half dozen lug nuts, the cadre of unofficial Green Angels promptly figured out the solution to the problem and simply removed a single nut from each of the remaining three wheels, screwed them on the errant wheel and lowered the vehicle.

With only a few of the lug nuts replaced, but sufficient to secure the wheel to the hub, everyone leaped back into the cab, started the engine and, as customary, ignored the Alto sign, turned right and hurried down Fremont.

An uncommon story? Not really. I fondly remember the convoluted experience as just another day in Paradise. Imagine the excitement, police response and monetary fines a similar incident would cause in the States!!!