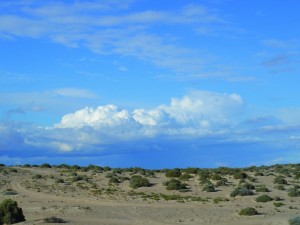 Looking north towards Arizona, darkening clouds continue to bubble-up. TV weather guys have been telling me for a couple of days the wind, rain and snow currently pounding the deserts and mountain areas of the Grand Canyon State will have similar influences in Rocky Point (early March).

Maybe, but I doubt it. So far, only the wind has shown up. As usual, the weatherman is about one-third right in his forecast.

In baseball statistics, batting. 333 is pretty good. Speeding down a dragstrip at 333 mph is excellent. But only getting the weather prognostication. 333 correct is not hardly record setting.

I’ll agree, predicting the weather can be an iffy situation. Dealing with Mother Nature is not a precise science, nor are the mechanics involved in attempting to calculate future atmospheric conditions as simple as reviewing satellite images beamed to the Weather Channel.

On the third morning of the weather advisory additional cloud cover moved in and several drops of moisture began to fall. Technically, the weather dude was now hitting.666, doubling his average.

As the day progressed, cloudiness intensified and waves of moisture replaced the sporadic droplets previously drooling down the windows.

Could the TV “meteorologist” actually get it right this time? Is a round of snow coming to complete the trifecta?

Odds are against it. In fact, as I sit pecking this little missive, blue skies are beginning to emerge in the west and the little humming bird has returned to sample the delicacies of the feeder.

Paradise, like any other location on Earth, is occasionally susceptible to inclement weather conditions. But where else, but Rocky Point, does a humming bird announce the end of the storm is near and prophecies of snow and gloom have been greatly exaggerated?

Still, the weather guy will return again tomorrow with a whole new explanation of why it didn’t snow because the “computer models” were deceived by an upper-level jet stream, resulting in unanticipated lows in the Mississippi Valley with contrasting highs somewhere above Cheyenne, Wyoming. Or, vice-versa. All of this goop mixed together to produce another erroneous forecast.

In the meantime, I’ll take advantage of the lull and hurry down to Super Ley to restock my emergency supply of batteries and beverages. Never know when the next nor’-easter is going to roll-in from the south!